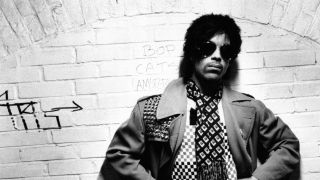 At the 2004 induction ceremony for the Rock ‘n’ Roll Hall of Fame, an all-star band paid homage to George Harrison with a cover of While My Guitar Gently Weeps. There was Tom Petty, Jeff Lynne, Steve Winwood, George’s son Dhani, and in the shadows, Prince. Dressed in a black suit, scarlet fedora and toting a blonde Telecaster, he chunked along on rhythm, then halfway through, stepped into the spotlight.

What followed was mind-blowing. Two-minutes worth of sobs, moans and blazing fretwork that played like a condensed history of rock guitar, channeling Clapton, Hendrix and Van Halen with such unbridled joy and passion (at one point, Prince even intentionally fell backward off the stage into the arms of a stagehand) that even his legendary bandmates looked stunned. It was a musical expression so raw and soulful that it burned through the stately tribute to remind us why rock’n’roll was so powerful in the first place.

If that was all he ever did, we’d still be talking about him for years to come. But when Prince died unexpectedly at age 57, on April 21, 2016, he left behind decades of such transcendent moments, along with unparalleled depths of creativity, over 40 albums with100 million sold, classic singles like Little Red Corvette, Kiss and Let’s Go Crazy, and a profound influence that has infused almost every aspect of rock and pop for the past thirty years.

Born to jazz musician parents in Minneapolis on 7 June 1958, Prince Rogers Nelson was a loner, whose best friend was always music (“I’m dedicated to music, to the point that I see all of life through it,” he once said.) He wrote his first song at age seven. By the time he was a teenager, he’d mastered several instruments and was a budding studio whiz. With unprecedented creative control out of the gate, he wrote, arranged, produced and played almost everything on his first five albums, from 1978-1982. The spare, pogo-funk sound of those early records, typified by songs like When U Were Mine and I Feel For U, was charmingly offbeat and original.

As he honed his sound, there were plenty of missteps too. But then Prince was never afraid to try and fail. Or look ridiculous. The mark of a true artist. I remember the first time I saw him on TV, in 1981, performing Controversy, a tiny chap with a pencil moustache in fishnets and garters. It was audacious, but unforgettable. And undergarments aside, the song had a groove that rattled my bones like they’d never been rattled. As a hormonal teen, that was the first inkling I had of one of Prince’s greatest gifts - he put you in touch with your inner freak in a way that no one else ever did. Here was an artist who was punk, glam, straight, gay, sacred and profane all at once, and made that seem like an aspirational model rather than an aberration.

The breakthrough double-whammy of 1999 and Purple Rain began his decade-defining reign, as he rivalled Madonna, Bruce Springsteen and Michael Jackson for global supremacy. And yet, you always got the sneaking sense that Prince could easily do everything his contemporaries did if he chose to, and without breaking a sweat. His side projects further attested to his expansive abilities. As Alexander Nevermind and Jamie Starr, he dashed off hits for Chaka Khan, The Time and Sheena Easton. And As Christopher Tracy, he wrote Manic Monday for The Bangles, a sugar rush of Byrds and Beatles that somehow sounds like neither, but only him.

We hail triple threats, but Prince went way beyond that. Producer, arranger, band leader, multi-instrumentalist, singer (that falsetto!), dancer (those splits!), actor. But it may be as a songwriter that he left the deepest impression. He had an encyclopaedic command of styles, but again, his gift was how he could transcend influences and spike them with eccentricity. Dip into his catalog and come out with something startling every time. Cream, boogaloo rock. Raspberry Beret, catchy pop. 1999, hyper club anthem. Purple Rain, epic ballad. Sign of the Times, minimalist funk. Thieves in the Temple, exotic mysticism. And then there’s When Doves Cry, to this day in a class by itself, one of the most original records ever made. Smuggling Oedipal drama and raw sexual imagery into a rock tune that wowed fans of every persuasion.

Even after his purple period, he continued to be prolific (his unreleased catalog is nearly as expansive as his official discography). He defied the major label model, self-releasing albums and always confounding expectations, whether it was N.E.W.S., 2003’s Grammy-winning album of jazz-fusion instrumentals, or his psychedelic-funk record with all-female backing band 3rdEyeGirl. And every time we started to take Prince for granted or think he’d lost the plot, he’d blaze forth with some show-stealing performance to remind you just how badass he still was. The 2004 Grammy Awards, out-diva-ing Beyonce. That Hall of Fame guitar blowout. The 2007 Super Bowl, commanding a stadium crowd with Purple Rain, under a torrential downpour.

Through it all, he made it look effortless. And sexy. And fun.

Speaking of fun, he sometimes gave the mystique a day off, goofing around with The Muppets or Arsenio Hall. But still those candid moments reinforced that Prince was not like us. He knew how to cook only one thing – omelettes. He’d never heard of infomercials. He only slept for three hours a night. He didn’t believe in time. “I don’t count,” he said. “When you count, it ages you.”

At the time of his death, Prince had recorded four new albums over the previous 18 months, and was working on a memoir. He was also, as he had been for years, touring and playing guerrilla gigs after hours in small clubs.

“A strong spirit transcends rules,” he once said. Not only a mission statement for his amazing life, but an epitaph. Prince’s spirit, songs and influence will surely transcend our own generation and others to come. RIP.