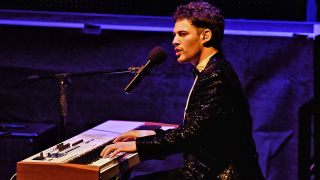 That Joe Payne has released a live video for his track End Of The Tunnel exclusively with Prog.

The video with his band was filmed on the opening night of the By Name, By Nature UK tour at The Court Theatre in Tring on March 7 – just days before the country-wide lockdown came into force.

That meant the rest of shows with special guest Amy Birks in Southampton, Bury, Glasgow and Birmingham were called off – but Payne has rescheduled the three English dates for later in the year, and intends to make it to Glasgow with a new show in 2021.

Payne says: "The COVID-19 epidemic has had a huge impact on performing artists, but thanks to your support I consider myself to be one of the lucky ones. You have been absolutely amazing, and I want you to know how appreciated you are.

“Now that I’ve been so spoilt for time, I have decided to use it wisely, refining my album and accompanying live-shows which can both now be expected to re-launch in August 2020.

“I was absolutely buzzed at the beginning of March when we performed the first show, and the reviews and feedback were outstanding. So understandably, everyone involved was gutted to have to cut the tour short after putting so much work into it.

“We are marching forward with hope and positivity, and still intend to make 2020 the success we envisioned it to be. The show must go on!"

Payne adds: “Thank you for being such a solid rock at this time and continuing to support me and the band. Your commitment means the world to us.

“Please check out my new live-band video for End Of The Tunnel which gives a taste of what to expect from the show.”

For tickets, visit Payne’s official website. Joe also has a Patreon page where fans will be able to live-stream the shows if they are unable to make it to any of the performances.