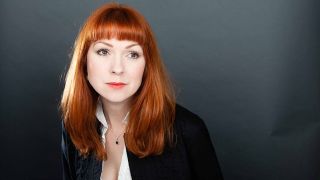 Ms Amy Birks has been busying herself during lockdown, recording a session of four songs from her recently released debut solo album All That I Am And All That I Was which was released earlier this month.

Hooking up with her guitarist Tom Manning, Birks has recorded a short. session featuring All The Fault of the Lady Anne, Catherine, Unlike The Hear and Jamaica Inn. You can watch Amy's live session in full below.

“"As we're not yet able to get out and tour the album, I thought I'd start to gather a few musicians together to bring the songs of All That I Am & All That I Was to you.." Birks tells Prog. "Thanks to guitarist, uni friend and one of the original Beatrix Players, Tom Manning for joining me. Stay safe everyone and I'll be back with a few more songs very soon."

Birks is working on a new live session which you will be able to watch via the Prog website, and which might just possibly some old Beatrix Players songs. Watch this space...