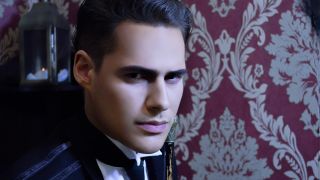 Former vocalist of The Enid Joe Payne has announced his return to music.

He parted ways with the band last year and checked in with an update on his career plans in September, reporting that he was working on his debut single.

Now Payne has given further details on the track titled I Need A Change – and revealed he’ll record and tour under his new identity ‘That Joe Payne.’

Payne says on his brand new website: “After months of hard work, writing and recording, I am delighted to announce my return to music. Today, Friday, December 1, I am launching my new identity as ‘That Joe Payne.’

“If you’re wondering where ‘that’ came from, well, it is quite simple. It’s a reminder to myself never to allow my anxiety to break me again. Having only recently come to accept myself for being me (whatever it is I am), until now I had always projected myself as a person desperate to win over the sceptics.

“In my head, I was always ‘that singer’ who ruined your favourite instrumental song. ‘That fag’ who was too musical theatre for you. ‘That kid’ who couldn’t possibly be capable of anything, alone.”

Payne adds: “Those voices, existing more in my head than the real world, were a big part of my fall from grace in 2016. Will I let them win again? Hell no.

“I’m ‘that writer’ who released seven albums in four years. ‘That performer’ who exceeded expectations with every show. ‘That artist’ who sacrificed his own health in the name of perfectionism.

Payne will launch his debut single I Need A Change on March 2 and mark the release with a show at The Picturedrome, Northampton, on the same day.

He says of the single: “I’m very attached to this one. It’s the most heartfelt thing I’ve ever done, and a real window into the album I’ll be releasing later down the line.

“It’s 8 minutes and 23 seconds of pure unadulterated me. I Need A Change is accompanied by the bonus track Moonlit Love, produced exclusively for this single release.”

The Enid split with Joe Payne