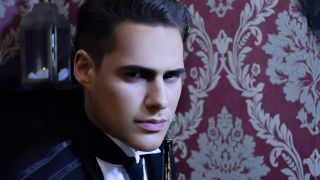 That Joe Payne has announced two special shows for later this year in London.

He’ll take over the Secret Cabaret at Simon Drake’s House Of Magic on November 9 and 10, where he’ll perform two 45-minute sets spanning music from across his seven-year career.

The location of the venue – which will be somewhere near the centre of the city – will remain a secret, with only those purchasing tickets told where the intimate shows will take place.

Payne says: “I’m ready to take my shows to the next level. It’s time for me to push the boundaries of what I can do live, and Simon Drake’s House Of Magic offers me opportunities to do things I would never be able to achieve anywhere else.

“I’ll be performing at least one track from every album I’ve ever made since The Enid’s INVICTA, and after these shows I’ll be hanging up most of my back catalogue for good to focus on new material.

“This will be the last chance to hear a lot of these songs.”

The audience will be seated at tables at the secret 100-capacity venue, while food will also be available for those wishing to enjoy the experience as a dinner theatre.

Tickets for the two performances are on sale now.

Illusionist Drake has worked with Payne before, directing shows for The Bridge and Dust when the vocalist was a member of The Enid.

Payne released his new solo track I Need A Change in March, which was backed by Moonlit Love. Both tracks can be purchased through Payne’s website.