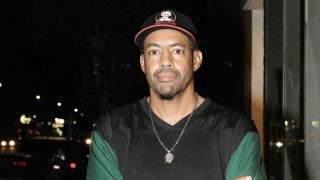 Steve Vai and Mike Portnoy are among a host of stars lined up to perform at a benefit concert for Tony MacAlpine, who was recently diagnosed with colon cancer.

The guitarist, 55, postponed tours of Asia and Australia after the cancer was discovered and he later had to pull out of a European trek too.

Vai and Portnoy will be joined by Zakk Wylde, John 5, Billy Sheehan and Derek Sherinian for the gig, which takes place at the Wiltern Theater in Los Angeles on December 12.

An auction will be held at the event, with guitars donated by Vai, John 5, Paul Gilbert, Joe Bonamassa, Steve Lukather, Steve Stevens and Joe Satriani up for grabs.

Portnoy says: “Tony is a dear friend, an absolutely sweet human being and one of the most talented musicians I’ve ever worked with. We are coming together to help raise money and awareness to help him fight his battle and come out on top.”

Vai adds: “It’s a great privilege to take to the stage with my friends Zakk, John, Mike and Billy in support of our dear friend Tony. Tony has always been blessed with an exceptional talent and more so, he’s an exceptionally cool guy. It’s a great cause and will be a magical evening of guitar extravaganza.”

Tickets for A Benefit Concert For Tony MacAlpine are available via LiveNation.