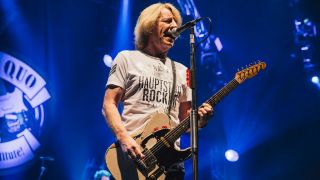 The guitarist reportedly had a defibrillator fitted into his chest to monitor his heart following the incident – and he won’t rush his return to the band until he has a clean bill of health, Status Quo manager Simon Porter says.

The son of Quo bass player John ‘Rhino’ Edwards will fill in for Parfitt on the band’s summer tour, with Irish guitarist Richie Malone stepping in for the Leuven, Belgium and Edinburgh dates.

“He has now had a defibrillator fitted into his chest in order to regulate any future heart issues and has left hospital in order to recuperate with family and friends.”

He continues: “Although I am now happy to report that his medical team anticipate that Rick will make a full recovery, it will likely be a long and ongoing process.”

In 2014, Status Quo were forced to cancel six shows because of illness affecting the guitarist, who underwent a quadruple heart bypass in 1997.

Meanwhile, Status Quo have shared a video for Rockin All Over The World from their Aquostic! Live At The Roundhouse DVD, which was released last year. It can be viewed below.

Status Quo will tour Europe throughout the summer before their Last Night Of The Electrics UK tour in December.