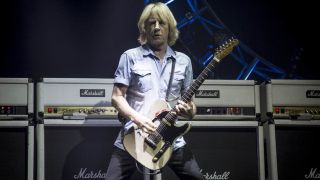 Status Quo guitarist Rick Parfitt is being treated in a Turkish hospital after suffering a suspected heart attack.

He fell ill following the band’s performance in the country after performing at the Antalya Expo last night (June 15). His condition is described as serious, although a press release states that Parfitt has “already demanded his customary cup of tea with two sugars and a sweetener.”

Quo manager Simon Porter adds: “No further comment will be made at this stage until the completion of the next round of tests and assessments to be made over the next few days. We would ask you to respect the family’s privacy at this difficult time.”

In 2014, Status Quo were forced to cancel six shows because of illness affecting the guitarist, who underwent a quadruple heart bypass in 1997.

The band have decided to go ahead with the Rock On Windermere charity show on June 18, and Freddie Edwards, son of Quo bassist John ‘Rhino’ Edwards, will step in for Parfitt.

He’s expected to stay in the lineup for their show in Stockholm, Sweden, on July 3.