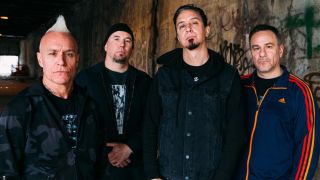 Sick Of It All (Image credit: Jammi York)

Sick Of It All have released a video for their new single Self Important Shithead.

The track has been taken from the New York outfit’s latest album Wake The Sleeping Dragon which was released last year.

The band explain: “If you’re a shameless narcissist, watch out! Our new video release deals with just that type. Self Important Shithead is a parody of what we’ve become as we portray a false image to the world with our smartphones, and is shot guerrilla style in real New York City settings while pissing off real New Yorkers.

The band have released the video to mark the news that they’ll head out on tour across Europe with Comeback Kid and Cancer Bats later this year.