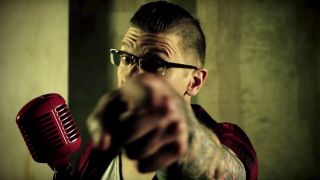 Shinedown have released a video for their track How Did You Love.

It’s taken from their fifth album Threat To Survival, which was released last year. They were recently confirmed as the support act for Iron Maiden’s European tour in April and May 2017.

Frontman Brent Smith says of the track: “It’s very unique, the statement in the song. How Did You Love asks the question, ‘How did you live your life?’

“If you’re born you’ll pass away eventually. You know it’s going to happen. But what did you do in the meantime? What was your legacy? Did you inspire people, were you good to people? Were you good to yourself? Were you able to let go of hate?”

He adds: “It’s harder sometimes to be positive than it is to be negative. The question in the song is meant to be an eye-opener, like, ‘If I wasn’t living before, I’d better start living now.’”