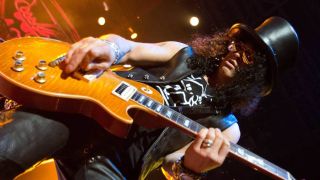 These days, if you could prise one from Joe Bonamassa’s determined clutches, an original 1959 Gibson Les Paul Standard would blast a £200,000 size hole in your bank balance. More, if it was Peter Green’s old ‘59, sold to disciple Gary Moore and later punted for at least a couple of mil. The current owner? Enter Kirk Hammett of Metallica.

All this talk of high finance is not that unusual for an object acknowledged by Bonamassa, Greeny, Paul Kossoff of Free, Led Zep’s Jimmy Page, Whitesnake’s Bernie Marsden and plenty others as the greatest electric guitar ever made.

The Les Paul model was unveiled in 1952 to capitalise on the Fender Esquire and Telecaster model (the latter originally dubbed the ‘Broadcaster’; it’s a long story). Hugely popular guitarist Les Paul (born Lester Polfus) had been experimenting with the concept of a solidbody guitar since the 1930s. Despite the fact that Paul was a genius who pioneered multi-tracking recording (using technology seized from the Nazis; another long story), and the use of effects on records, Gibson Guitars fobbed him off when he came itching with his novel solidbody idea.

A few years later, seeing the Fender was shifting big numbers of its electric solidbody guitars, Gibson decided to listen to Les Paul. This is where the myth begins that Les Paul designed his namesake guitar. He didn’t. He was barely consulted as the guitar that would become the greatest ever was designed by Gibson’s resident genius Ted McCarty. This is the man who also designed the iconic ES-335, the SG and the way too-far-ahead-of-their-time Flying V and Explorer. The latter two guitars were originally released in 1958.

The Les Paul Standard (it wasn’t officially designated as the ‘Standard’ until the late 50s) went through various changes after its launch in 1952. The first year’s models were a disaster thanks to a poor neck angle and a badly designed combined bridge/tailpiece that made the guitar virtually unplayable. These problems were rectified in 1953 and further refined a year later when the now iconic tune-a-matic bridge and stop tailpiece combo was spec’d.

During this period, and up to late 1957, the model retained its metallic gold finish (hence the LP Goldtop name) and a pair of singlecoil P90 pickups. Then something magical happened. The 1958 Les Paul Standard received a pair of Gibson’s new humbucking pickups. As the name suggests, these pups, designed by another Gibson genius, Seth Lover, eliminated or ‘bucked’ the 60-cycle hum produced by singlecoil pickups.

A year later, Gibson slimmed down the 1959 Les Paul’s neck, coated it in a sweet Cherry Sunburst finish, and created the guitar that keeps Joe Bonamassa awake every night. It produced a beautiful lead tone that was epitomised in Mark Knopfler’s both ‘buckers’ on solo tone on Dire Strait’s Brothers In Arms.

Alas, it was not always thus. In 1960, the Les Paul Standard, and its sibling the Custom aka the ‘Black Beauty’, were dumped from the Gibson catalogue after years of poor sales. The LP Standard and Custom were replaced by a new design also designated the Les Paul model. This new design was renamed the SG (it means ‘Solid Guitar) in 1963 when Mr Les Paul himself objected to the guitar’s looks, performance and possibly the fact that his estranged wife Mary Ford was in line for royalties if his named remained on a Gibson guitar range.

So, yeah, the Les Paul was dead. What killed it was the rise of Fender guitars. The Fullerton, California-based company hit on the idea of painting its Stratocasters, Telecasters, Esquires et al in the same DuPont colours featured on the Lincoln, Ford and Chrysler sleds rolling out of Detroit. The Gibson Les Paul looked like your daddy’s guitar. A shell pink Fender Strat looked like it had fallen from a passing flying saucer. Pretty soon, the kids in America were getting their feet wet in the surf music explosion and, bar a few Mosrite guitars, everyone was hanging ten - daddy-o - on Fenders.

So, you get the idea. The Les Paul was fucked. Well, that’s how it seemed until salvation came in July 1966 with the release of the ‘Beano’ album aka Blues Breakers by John Mayall’s Bluesbreakers with Eric Clapton. These days we associate Eric Clapton with an aching sense of boredom but back in the mid-60s he was an ex-Yardbird looking to make a name for himself.

His brief association with John Mayall changed the history of guitar. Someone with far too much time on their hands graffiti’d ‘Clapton Is God’ on a wall in London. Maybe he was… Maybe it was his spray can. Perhaps we weren’t meant to know, but what’s in no doubt is his use of a 1960 Les Paul Standard directly resulted in the model being reinstated in the Gibson catalogue in 1968. It’s been manufactured ever since.

If you’re looking for the definitive Les Paul tone - and no, it’s not November Rain - pick a track from the Beano album. In fact, we’ll save you the trouble and pick the best one for you. The intro of All Your Love blew British guitarists out of their Beatle boots in 1966. Clapton famously played loud in the studio through a 2 x 12 Marshall 1962 model amplifier, the combo that has since been immortalised as the ‘Bluesbreaker’.

Of course, he might have been the first but Eric wasn’t the only cat who put the Les Paul back in business. His replacement in the Bluesbreakers, Peter Green, who bought a Les Paul cos Eric used one, is regarded as the greatest British blues guitarist of them all. Then there was doomed American blues icon Michael Bloomfield who played with Dylan, The Paul Butterfield Blues Band and his own group Electric Flag.

After those guys, the Les Paul Standard flourished finding its way into the hands of Duane Allman, Dickey Bett’s and your man Slash, who was the second player to save the model from obscurity when he defied the prevailing fashion for pointy metal guitars in the late 80s. He can stake his claim to the definitive Les Paul rock tone with this little intro…