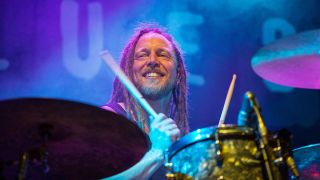 Shinedown drummer Barry Kerch says their video for Asking For It makes fun of the band as much as it does of the music business as a whole.

Asking For It is lifted from Shinedown’s latest album Threat To Survival and the video features four kids playing the role of each band member as they go through a typical day in the life of a rock star – with sleazy managers, over-the-top photographers and headline-chasing journalists all getting their piece of Shinedown.

Speaking to TeamRock backstage at Download following Shinedown’s set on the Lemmy Stage this afternoon, Kerch says: “We write songs about things we go through and you have to be careful what you say in this industry, because it will bite you in the ass if you’re not careful.

“All those things you hear in the video are things you’ve actually heard. ‘We liked them better when they were fat and lazy drug addicts.’ Somebody actually said that to us before. Those are all true stories.”

The Asking For It promo doesn’t follow the pattern of a standard music video and Kerch feels passionately about the need to package things for the modern consumer.

He adds: “You’re not doing a short movie anymore, you don’t get the multi-million budgets from the label. You’re making a video for YouTube and the social media kids out there, but it also has to be entertaining.

“In the younger generation’s world everything is free and they want to see it right now. I don’t want to make a video where it’s us playing in a room and you have to spend 15 hours to capture us playing in a room. That’s boring – those videos have been done a million times over. So why not try to do something funny or at least different.

“Everybody knows we play our instruments, you don’t need to see me in a video playing my instrument. So let’s have a little fun.”

The child actors in the promo responded to a casting call in Los Angeles and Kerch says they were excellent on set.

“Those kids were adorable, he says. “They couldn’t have been sweeter. And that poor kid that played me on the drums really busted his hand playing those drums. He was tearing up, but he was so tough and he almost broke his finger. I felt so bad for that little kid.”

Shinedown join Halestorm and Black Stone Cherry on the Carnival Of Madness tour in North America this summer and also have a string of their own headlining dates.

TeamRock is at Download all weekend. Visit teamrock.com to keep up with all the news, reviews and interviews from the festival as they happen.