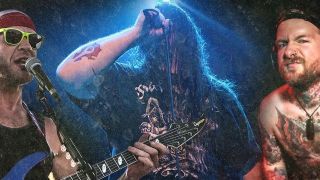 The supergroup features Killswitch Engage guitarist Adam Dutkiewicz, Cannibal Corpse frontman George ‘Corpsegrinder’ Fisher and The Black Dahlia Murder’s former drummer Shannon Lucas. They’ve made track The Vengeance In Me available to stream from the record, which can be heard below.

The origins of the band can be traced back to the Rockstar Energy Drink Mayhem Festival in 2009, where Dutkiewicz asked Fisher if he would contribute vocals for songs he planned to write. Lucas was also tapped to record drums for the album that summer.

Serpentine Dominion is available to pre-order on CD and vinyl.

Meanwhile, Dutkiewicz confirmed to TeamRock in June that his KSE spinoff project Times Of Grace would put out a follow-up to 2011’s The Hymn Of A Broken Man.

He said: “We’re going to do another record. I have written five songs and I’m hoping after we get home from tour, I’ll start demoing some more material.

“Once we get enough demos for a record we’ll probably go into the production stage.”

Killswitch Engage are trekking North America, and will promote their latest album Incarnate on tour with Bullet For My Valentine later this year. Cannibal Corpse are currently on the road with Nile, After The Burial, Suffocation and Carnifex as part of the US Summer Slaughter tour.

Why Supergroups Matter, By Tobias Sammet