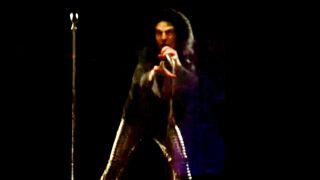 Official video footage of the Ronnie James Dio hologram performance at Wacken has been released.

The late former Black Sabbath, Rainbow and Dio singer was reunited with old bandmates at the German festival last week when a hologram in his image performed with offshoot band Dio Disciples.

The hologram version of Dio and the band performed his seminal track We Rock and it was later confirmed the band are working on planning a tour with the hologram.

Official footage of the performance can now be viewed below.

Dio’s widow Wendy says: “What an emotional week. I’m quite proud of the performance that our team and the band pulled off at Wacken. It was truly a night filled with firsts.

“Live music is one of life’s most precious treasures. I can think of few other things that bring people together so closely. That bring such joy and excitement.

“We want to create an enduring tribute to Ronnie that gives his music an opportunity to continue touching the lives of new and old generations of fans.

“With the hologram show that we are working so hard on, we’re envisioning a new way to enjoy live music. A new world in which the music never dies. We want to bring you some place magical, if only for a night.”

The Wacken debut of the hologram was a year in the making and the firm behind the idea, Eyellusion, said it was “the first time a hologram has been accompanied by a live band in a traditional concert setting.”

Dio Disciples lead guitarist Craig Goldy said: “We can’t wait to bring this experience to even more of his fans and perhaps even a newer generation when we bring this incredible live experience on the road next year.”