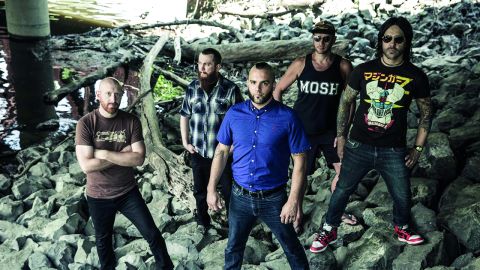 As homecoming parades go, Jesse Leach’s return to the helm of the Massachusetts metalcore kings couldn’t have been more exciting or justified, with the flawless Disarm The Descent being both a celebration of the band’s evergreen formative years and a successful foray into pastures new.

Though it would have been easy for them to repeat the trick with Incarnate, their seventh album sees Killswitch Engage in more reflective, sober mood, albeit still holding onto the principles that won them the throne that countless contenders have tried, and failed, to usurp.

First single, Strength Of The Mind, impressively boasts all the hallmarks of what has made the band standard bearers for the turn-of-the-century New England sound, with a seamless blend of melodic death metal guitars, hardcore guts and Jesse’s poetically candid lyrics that act as much as a self-help guide as a call to arms. Meanwhile the rapid-fire Until The Day, Alone I Stand’s gallant opening salvo and the clinical riffs of The Great Deceit are all vintage KSE anthems full of massive vocal hooks and Adam Dutkiewicz and Joel Stroetzel’s trademark twin leads that demand mass singalongs and arms held aloft.

But while the foundation of these songs are what the band have been dishing out with ease for the past 15 years, there are added depths and textures that help the music complement the darker themes of Jesse’s lyrics, which despite being delivered with triumphant Positive Mental Attitude, have always come from a vulnerable, tortured soul. For a band that have made a habit of writing songs that permanently imprint themselves on your DNA the second you hear them, it’s a bold move to craft an album that takes patience to truly appreciate.

Just Let Go sees Jesse laying his emotions bare with almost unsettling honesty, before Embrace The Journey… Upraised’s barrage gives way to the most sorrowful chorus the band have ever put their name to, with the song descending into sumptuous windswept tones. Quiet Distress’s acoustic intro is the calm before a storm erupts and leads to twin vocals in the vein of Dutkiewicz and Leach’s Times Of Grace project, while the tender melodies of Cut Me Loose deflect jabs of intense riffs to evoke a real personal triumph. The album’s final third sees the tone darken considerably, completing the vision of 2009’s troubled eponymous album by striking a balance between mournful moods and uplifting, life-affirming moments. The slow-burning It Falls On Me is almost harrowing in its bleak confessions before a chaotic finale. We Carry On’s gorgeous chiming harmonies barely pierce a heavy cloud of desperate melancholy before the closing Ascension’s grooving riffs and rhythmic bursts elevate another impassioned chorus.

Though not as immediate or assertive as their most celebrated moments, Incarnate sees KSE further developing the sound they’ve spent their lives perfecting, mining new seams and being unafraid of confronting the darkness of both the world and within. Give it time and you’ll soon be captivated by its consuming zeal.

How hard is it to keep evolving a band like Killswitch this long into your career?

“Oh it’s tough, because you have your established sound and you don’t want to go too far away from that, especially in a genre like metal. But I think we did a pretty good job of sounding like the band you know and love and maybe just tweaking it here and there. Adding a few extra flavours in to keep it fresh.”

What extra flavours would they be?

“Just being a bit more expansive, man. There are some more melodic parts in there, which we’ve always touched on before, but when we rage we go for the throat. There are a couple of tracks on this record that are super fucking heavy. And I like that we can run all the way up and down the scale like that.”

This is a very personal album for Jesse. How did the rest of the band feel about the content he was bringing?

“Jesse is one of the best vocalists and lyricists around. So we trust him completely to come up with things that are important to him, honest and interesting. He’s one of the things that sets this band apart. But we all work together in the studio to make sure that we bring the best out of one another. That’s always been our way, Jesse included. He had a lot of lyrics and ideas, I mean a lot, but he was still able to come in and take our input on board, because he knows we have the best interests of the band at heart. So, it was a really pleasurable collaborative experience.”