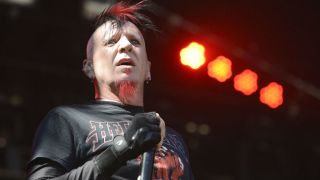 Hellyeah’s Chad Gray says Pantera “can never do a reunion.”

The supergroup frontman and former Mudvayne vocalist calls out fans for seemingly forgetting that drummer Vinnie Paul watched his bandmate brother Dimebag Darrell “get tragically murdered in front of him.”

He tells Revolver Mag: “Tragically, even if Vinnie wanted to, Pantera can never do a reunion. You can’t do a reunion without a member of a band.

“I think that people forget the emotional aspect of this. Vinnie watched his brother get tragically murdered in front of him, and what’s on their mind? They want to see a Pantera reunion.

“I’m not trying to call people out as assholes, but people are kind of assholes. They forget that he had to live this.”

Gray also insists there are “many reasons” why Mudvayne no longer exist – and explains that Hellyeah’s latest album Undeniable is inspired by their frustration at continued reunion discussions over their former bands.

He says: “It is what it is. I’m tired of stringing people along. I still talk to the guys – we’re cool. But for many reasons, Mudvayne doesn’t exist anymore.

“Someone posted that ‘Mudvayne 201?’ thing online, and they shouldn’t have done that because it’s fucking with Mudvayne fans emotionally, which isn’t fair. I don’t want to wind people up, but who am I to say that can never happen again? But I’m certainly not gonna say that it can.”

Gray continues: “As an artist – or whatever you do – you wanna be respected for your work. But even after all the records we’ve done, there’s still the stigma of Pantera and Mudvayne and everyone wanting the reunions and all this shit, so it was like, ‘Is what we’re doing not good enough?’

“I think it was this unspoken headspace that we had going into this new record, and when I was writing the song Be Undeniable, I came up with the line, ‘If you’re tired of being denied, be undeniable and dot your I’s on the bottom.’

“And dotting your I’s on the bottom is an exclamation point. So I think the name Undeniable kind of validates what Hellyeah does.”

Dimebag Darrell Abbott was shot dead onstage while performing with Damageplan in Columbus, Ohio in 2004. He was 38.

Since then, Vinnie has consistently said a Pantera reunion is out of the question – though former frontman Phil Anselmo has admitted he’d “do it in a heartbeat” if given the chance.

In 2014 Gray said he “wasn’t ready to put a headstone” on Mudvayne, despite sacking long-term associate and Mudvayne co-founder Greg Tribbett from Hellyeah earlier that year.

Why the world doesn't need a Pantera reunion