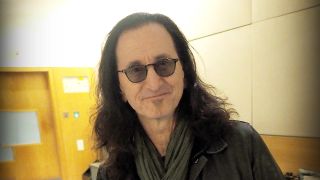 Rush frontman Geddy Lee says the band’s future is still “in flux” – but he hopes they’ll work on another studio project together.

Lee tells the Montreal Gazette: “It’s a complicated subject – there are a couple of issues at stake here. Neil Peart has a young daughter and he doesn’t feel comfortable leaving her.

“Alex has had numerous health issues but the overriding one seems to be that he has arthritis. He’s not sure how that’s going to affect his ability to play. So those are the critical factors in whether we’re able to continue to tour.”

He adds that he can “certainly see us writing together and putting a musical project together.”

But he continues: “I can’t really tell you how that would present itself in a life situation. I don’t know that there’s the will from my two partners to do any kind of tour.

“I wouldn’t exclude the possibility of doing a set of dates or some one-off things. It’s an ongoing conversation, and it’s a decision that’s in flux.”

Rush are cover stars of the current edition of Classic Rock, on sale now in print, digital and via TeamRock+. Their hometown shows this week will be filmed for future release. Lifeson previously talked up the chances of “special runs” following their current live commitments: