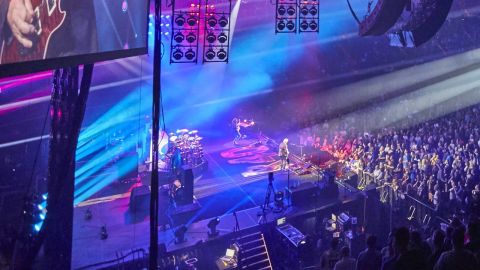 The first ripple of applause of the night goes to the three guys snaking through the audience who’ve come dressed as 2112 era Rush, even down to Neil Peart’s flamboyant moustache. The fervour of expectancy for Rush’s last ever show (as this may well be) is so high that one thickset man in a Permanent Waves top, which must have fitted him once, grabs the guy who’s come as Geddy Lee by the shoulder and screams in his face: ‘Get on stage!’

The LA Forum is drunk and high, clouds of sweet smelling dope drift by, men fall into each other and topple sideways like they’ve just hit black ice… and all before the first chord has been struck. A couple who’ve flown in from Tokyo for three days, just to see the final show, clutch hands and stare dreamily at the giant R40 logo set across the safety curtain at the front of the stage. It might be emotion, it may be the $11 cups of beer you could float a boat in, but the air’s charged with something more than mere expectation. Four decades of Rush have lead to this moment. Little wonder then that when Geddy Lee first looks out three songs in, a hand shading his eyes like a ship’s captain staring out to sea, and says, “Thanks for coming out tonight and thanks for coming out for the last forty years”, people cling to each other like they’ve suffered some impenetrable loss.

Tonight’s a celebration though, albeit a bittersweet one, and Geddy, who has been battling a cold and minor throat infection for the last few weeks, sings as lustily as the eighteen year old kid who once covered Cream’s Spoonful in bars across Toronto. If it is his last hurrah, then it’s a great one. As he sings, and the set works its way back through time (starting with the Clockwork Angels album and ending back at Working Man), the crew, dressed in red R40 jumpsuits, like a very benevolent Slipknot, deconstruct the set. Tumble dryers come and go, walls of amps are built and then stripped back until we’re left with a solitary classroom chair as a stand for a solitary amp. The backdrop’s the Rod Serling school gym, a giant mirror ball hung high above the stage casting thin rods of light across the capacity crowd (some 19,000 people) like a light rain.

The Chili Peppers’ Chad Smith, powder blue baseball cap set high on his head, grooves approvingly as the band thunder through Subdivisions, while the Foos’ Taylor Hawkins is an animated splash of pointed fingers and expressive grins as the band count down their collective history. Even he takes pause as the band introduce Jonathan Dinklage from the Clockwork Angels String Ensemble to play a rare live version of Losing It. Dinklage used to jam in his bedroom to the song when he was a teenager and once — between shows on the Clockwork Angels tour — he told the band it was his dream to join them onstage and play it live. And as Geddy Lee told us earlier that day, “We thought, fuck it, let’s make his dream come true”. It’s a moment of intractable, pure joy, filled with both highs and lows, inexpressibly beautiful, the violin’s high, keening song reaching out to the distant, circular ceiling. It does something to an already charged crowd who are suddenly moist-eyed and hopeless, as if they suddenly realise what they’re about to lose or have already lost.

Closer To The Heart is similarly impactful as the Forum lights up with thousands of plastic star men logos held high. Swaying unsteadily, couples link arms as the song’s refrain echoes around the room and down through time. Xanadu buzzes into life as the stage becomes a giant lattice of blue laser beams, the audience in thrall as Lee and Lifeson strap on their double neck guitars.

Tonight marks the twenty-fifth time that Rush have played the Forum. Their first show here was on the 2112 album, so it seems appropriate that when the star man logo descends slowly on to the rear video screen and the band boom through Overture, that people start screaming and spilling their drinks as if the fire alarm has been set off. The album that saved the band from being dropped by their label a lifetime ago is born anew, ferocious and focused. Geddy and Alex exchange smiles and lean into each other once more, perhaps for the last time. Peart stands up on his drum riser to take pictures of the audience as the show roars to its finale, and then, surprising both Alex and Geddy, he walks up behind his bandmates as Geddy is saying goodnight and hugs them both, the three linking arms at the lip of the stage. He mouths “goodbye” and is gone. “Thank you for forty years and I hope we see you again”, says Geddy. There’s one final embrace for him and Lifeson, and a long last wave as the curtain falls and the lights come up, signalling an end like no other.

_Philip Wilding’s on-the-road report on the final dates of the R40 tour, featuring interviews with Geddy Lee, Alex Lifeson and Neil Peart, will appear in issue 215 of Classic Rock. This will be published in September. _