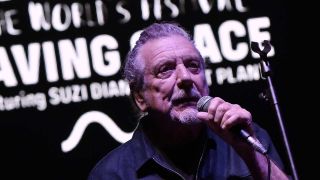 Other bands announced today for festival, which takes place June 19-21 at Eridge Park near Tunbridge Wells in Kent, include Shooter Jennings, Imelda May and Lukas Nelson & Promise Of The Real. They'll join a line-up that already features Wilco, The Waterboys, The Dead South, Courtney Marie Andrews and The Felice Brothers.

"This looks like a great bill," says Plant. "I've worked alongside most of these people in recent times, over here or over there. There's power and beauty. Looking forward to it!”

Saving Grace made their debut in January 2019, when they played a surprise show at the Sparc Theatre in Bishop’s Castle. They followed this with two shows supporting Fairport Convention, playing covers of songs by Patti Griffin, Blind Willie Johnson, The Everley Brothers and Donovan.

The band's last show was at Birmingham Town Hall in December, where they covered material by artists including Moby Grape, Levon Helm, Doc Watson and Low.

Robert Plant and Suzy Dian are joined in the Saving Grace lineup Tony Kelsey on guitar and mandolin, Matt Worley on banjo and guitar and percussionist Oli Jefferson.

Black Deer tickets are in on sale now.

Plant's Digging Deep With Robert Plant eight-disc singles box set is due for release next month. Released to celebrate the podcast of the same name, it includes remastered versions of 16 singles from 30 years of Plant's solo career, and comes packaged in a bespoke hardback book. It's available to pre-order now.