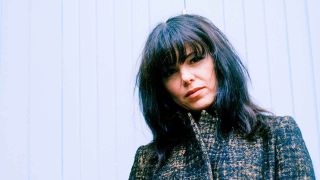 By Christ, we needed Imelda May back in 2003. As talent-show culture tightened its grip, the Dubliner broke cover with the bone-rattling, whoop-and-holler rockabilly riot of No Turning Back, and when follow-up Love Tattoo won her a roof-raising turn on Jools Holland’s Later, the mainstream cottoned on to what the Irish club circuit had known for years. Recent times have been tougher, with May documenting the split from husband and guitarist, Darrel Higham, on last year’s reflective Life Love Flesh Blood. Speaking to her shortly after its release, we found her reliably full of wit, wisdom, piss and vinegar.

Yes. But it’s not just a heartache album. It’s an album I wrote over the course of a year, and lots happened. First it was heartbreak, then it was guilt, regret, hope, joy, love. So I just wrote and wrote, and it was cathartic. There’s songs of desire, lust, all kinds of emotions. But I wasn’t prepared for some of the interviews, that got a bit close to the bone. Most of them are great, but a few were really going for it, wanting a headline. It’s a bit disturbing sometimes, when people are so cut-throat. They’ll open up the interview with: ‘So your marriage broke down, tell me about that?’ Wow. That’s heartless. How about ‘Hello’? I’m hoping that it doesn’t affect my writing, so that when I write again, I won’t feel guarded.

The Girl I Used To Be is about your Dublin background, isn’t it?

Yeah. I was from a great community, great people. But not the easiest of places. We had really hard times. There was no money about and lots of drugs, unfortunately, in the ’80s. Luckily, I came from a great family and had neighbours that were supportive. Eccentricity was highly encouraged. If I had a demo, the local fruit and veg man would say, ‘Give us that tape and I’ll make everybody listen to it’. You couldn’t get more ground-level than that.

You’ve said that things took off when your voice got rougher?

That was because of the older guys in the pubs in Dublin. A lot of them were off-duty from their bands, like Van Morrison and Hothouse Flowers, and they would just pull you to one side and give you a bit of advice: ‘You’re singing beautifully, but you need a bit of grit’. It would hurt sometimes, but I would just take it on the chin. I really desperately wanted to learn and be better. And I still do.

Do you have any memories from those Dublin club days?

Jeff Beck introduced me to Ronnie Wood at the Classic Rock Awards and I said, ‘Well, we’ve met before, but you probably wouldn’t remember’. But he immediately did. When I was 16, Ronnie was staying in a hotel nearby, and he went out for a drink with his brother. He ended up in [Dublin club] Bruxelles, where I was singing, and he jumped up onstage and we jammed together. Ronnie said, ‘You’re not that kid from that basement club? Oh, we need to do that again’. So a while later, we were doing a charity event, and Ronnie asked me to sing the same song with him – which was Rollin’ And Tumblin’ – 25 years after the event.

Were women prevalent on that Dublin circuit?

When I was a teenager, there was only really myself and Mary Stokes. She’s a great Dublin blues singer, and a little older than me, so I looked up to her. Obviously, there were lots of others – including Sinéad O’Connor – but I’m talking about in the pubs and clubs. There wasn’t many women there at all. It’s only recently I’ve noticed more women involved, and on a decent level. You see female sound engineers, photographers, making videos.

The only place I find no women at all – or very few – is in producing. I know that Kate Bush produced her own albums, but there’s not many. I’ve produced my own albums, and I want to get into production. I think it’s high time these things were addressed, especially in music, it seems, which is sometimes at least a decade behind when it comes to women. There’s a lot of creative people out there. It shouldn’t matter what their genitals are [laughs].

Moving to London in the post-millennium must have taken some guts?

Did you grow up with a strong work ethic?

Yes, very much a working-class family. There’s not many people in music from working-class backgrounds anymore, which I think is an awful shame. A lot of people think they have to go to college to study and end up in debt. That wasn’t the way for me. I didn’t want to know why I was doing something. I just wanted to do it, feel it, as opposed to the theory of how it came about. If I was listening to Billie Holiday and I wanted to know, how did she get to that, I’d find out who her influence was, and listen to Bessie Smith. You can teach yourself in that way. I think it’s important that people know that you can do that stuff yourself.

You always had a livewire stage presence: which frontwomen inspired that?

Growing up, I was really influenced by Debbie Harry. I thought she was phenomenal. And then to learn that she wrote so many of them songs… I just think she’s a genius. Chrissie Hynde. Annie Lennox. But then, Janis Joplin and Aretha Franklin, Mahalia Jackson, Sister Rosetta Tharpe, Big Mama Thornton. I never got taught in the formal way, so I’d listen to records, sing along and copy them. Y’know, Ella Fitzgerald: try to figure out she did all those little notes in-between the other notes, all those twists and swoops and sighs. I needed to know how she did that, and figure it out, and that was how I educated myself.

People are calling the new album ‘more mature’. Do you think you still have a wild side?

Oh yeah. I’ve got punk-rock in my bones. That’s why I got into rockabilly, because it has those bones in it, too, y’know, the original rebelliousness. But I wanted to sing more on this album. I wanted to write better. I hope this album has more maturity in it, otherwise I’d be emotionally retarded, if I didn’t mature going from 20 to 43. Y’know, I have a wild side. But I have a pensive side. A very observational side, too. I mean, I knew I was gonna have a few people that weren’t happy with it. For not doing what was expected of me. But that’s life. I have to write the songs I feel I want to write.

People tag you as ‘rockabilly’, but that doesn’t really cover what you do, does it?

Likewise, you’re often called ‘retro’ and ‘vintage’. But this isn’t just a ’50s throwback, is it?

I’m not from the ’50s, so I can’t write like I am. You’ve never had one lyric from me about cruising down a highway in a Cadillac, because I’ve never done that. I write about my own life and experiences, and I was always doing that. But I just put it into a few genres that I love and made sense to me, and were rebellious and exciting and slightly dangerous. The reason I was attracted to them was there was not many women in those types of music. And I never understood why. I thought it was high time somebody kicked some ass again.

You’ve worked with Jeff Beck for years. Why do you think you click?

Jeff is my pal and I love him to pieces. Last week, we were just sitting by the fire, drinking champagne – or whisky, or Guinness, or whatever comes to hand – just jamming away and laughing. The thing I love about Jeff is that he’s always looking forward. He’s like a kid in a sweet shop. I’ve never seen Jeff jaded. I like vibrant people. I like creative people. I like people who aren’t stuck in their ways. I like people who are open to ideas and change. I like people who aren’t sexist or racist or in any way narrow in their judgement. Jeff is really vibrant. It rubs off on you. And a good drinking partner? Absolutely. Better than me.

Life Love Flesh Blood is out now on Decca.