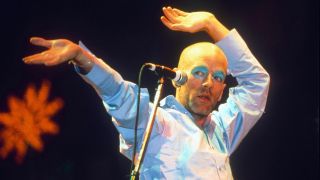 R.E.M’s headline set from Glastonbury 1999 is to be broadcast around the world next month.

The stream is part of the festival’s 50th anniversary celebrations and will premiere for free on YouTube on August 6 at 8pm BST.

R.E.M. hit the Pyramid Stage following earlier performances from artists including Blondie, Bush and Hole, with frontman Michael Stipe recalling: Hole did such a great set, I was like, ‘I’ve got to ramp this up, I’ve got to be great.’

“I think it was maybe a moment for R.E.M. and the UK where we had kind of been forgotten or pushed aside by younger bands, and that was a particular moment at Glastonbury where I think we pulled ourselves back to the front of the line and actually proved, this is what we’re capable of. It was a great show for us!”

Audio from the set was previously released on R.E.M. At The BBC in 2018 on 2CD, 2LP, on digital platforms and as a 8CD/DVD boxset which also featured radio sessions, live BBC broadcasts, rare and unreleased live and studio recordings and the band’s TV appearances, including their Jools Holland special in 1998.

The stream will be available for 72 hours only.