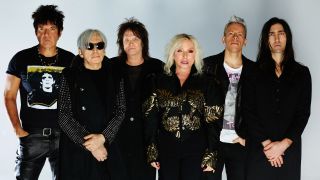 With 40 million album sales to their name, Blondie have been notching hits since 1976. Deborah Harry and Chris Stein set the scene for the group’s one-off headline date to promote their eleventh studio album, Pollinator, and an open-air summer show as special guests to Mike + The Mechanics. More touring is expected to be announced shortly.

Pollinator is a classic Blondie album, written by artists that have been influenced by Blondie.

Chris Stein: Yeah, that’s what the name refers to a little bit – cross-pollinisation, you know.

Deborah Harry: No. It’s strictly from the point of the music, and how you incite people or inform them, or give them some inspiration. And then it comes back to you from a song that they’ve written.

It could also be about Blondie – the band with a honey-sweet side.

DH: Yeah, but we have a sting as well, you know [laughs].

Stylistically, you’ve got a broad spectrum of collaborators, from former Smiths guitarist Johnny Marr to Joan Jett, Nick Valensi of The Strokes and Australian singer Sia.

CS: Sia’s fantastic. I can’t imagine anybody saying they don’t like what she does, because it’s just great.

Instead of using technology, the album was more or less recorded as a band in a room.

CS: Yeah. Everybody wasn’t together for the last two albums. We did those in bits and pieces and there was a lot of file sharing, so I knew we had to go back to doing things like this again.

Is this the end of Blondie’s electronic phase?

CS: No, I still do programming to write songs, and I like doing the computer stuff. When I wrote songs in the old days it was always with a tape recorder or a four-track, like a TEAC machine – remember those? – and then I’d overdub. So this is just an extension of that.

CS: Possibly, yeah. Though having said that, Monster has no specific political message. The world needs another Dylan to write that kind of stuff at this point. There’s nobody to do it. I don’t know if there can be. But [those sentiments] need some kind of anthem.

Trump is taking a lot of heat. What kind of things would President Harry change?

DH: Oh, a lot of things. I can’t believe that solar energy is not the primary source of energy on the entire planet. God, what are we waiting for? One of the greatest things in Germany is the country’s number of wind turbines. I think that’s really incredibly good.

Blondie play London Roundhouse on May 5, and British Summer Time Festival in Hyde Park on June 30.