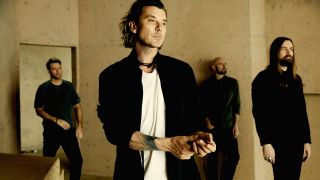 There was a lot people got wrong about Gavin Rossdale in the 90s. While tabloid rags and celebrity gossip mags pored over the details of his particularly active personal life, Rossdale and his band, Bush, were swept up in the post-grunge explosion that tore through popular culture for the best part of a decade. Somehow it felt like Rossdale never quite found a chance to catch his breath; to find sure footing amongst it all.

It didn't help that "real music fans" and sneering rock critics, growing restless with alternative music and its newfound place in the mainstream, turned on them. Their sound was dismissed as watered down grunge for teenage girls – as if capturing the hearts and minds of a teenaged population hasn't always been a fast track to global domination.

Time has proven unkind to those critics. Bush sit easily as one of British rock's biggest exports of the last three decades. This isn't hyperbole – the sales of 1994’s mega hit Sixteen Stone and its 1996 successor Razorblade Suitcase simply dwarf many of their contemporaries. It also means that a quarter of a century on from their commercial peak, Bush are releasing their eighth album The Kingdom – a record Metal Hammer call "a reminder of why Bush were one of the 90s' biggest bands".

To celebrate its release, Rossdale joins us to talk us through The Kingdom one track at a time.

1. Flowers On A Grave

Gavin Rossdale: "Flowers On A Grave is a song about getting to know yourself. Coming to terms with the notion that we change our mind within our own mind all of the time. I think that song has really found a way to connect with people during this pandemic. People feel this loneliness and people feel this longing, and some degree of soul searching. And it’s cool because the song kind of goes hand in hand with that.”

GR: “The Kingdom is a song about finding our way through anything that life throws at us. The concept of The Kingdom is this place of like minded individuals – we all want to live in a place free of judgement and free of self-righteous people. It’s a safe haven, a community and the like minded spirit of people.”

GR: “Bullet Holes is like a walk across a dystopia. This is even before the pandemic. Seeing burnt out buildings and seeing what we’ve done to life in many ways. It’s a really exhilarating song to sing. We’ve all been taken out by the people that we love the most and those are the Bullet Holes that I talk about. But it’s a beautiful thing because it’s all about rising through all these challenges, keeping on and not dying. Just living, all about living.”

4. Ghosts In The Machine

GR: “Ghosts In The Machine is really about how we're all on this treadmill of life and trying to find the best part of ourselves. It's weird how this pandemic has been happening and really made us have to rethink our priorities, what we're doing, and maybe get out of that rat race and live freely and more happily.”

GR: “I keep wondering why my themes are quite consistent, but I suppose that's just because these are snapshots of real life and cycles of attrition. I really like this idea of cycles of attrition – ways to keep things away from each other and even away from ourselves. Denial and stuff like that. Watch out, its quicksand, it’s loaded.”

7. Send In The Clowns

GR: “Send In The Clowns is all about that feeling of being misunderstood. It’s a terrible thing, and sometimes so easy to be misunderstood. People hardly know themselves, let alone other people, but somehow the feeling in this song is just about a kind of enemy faction viewing you in a way that is not actually you. So yeah, another song about feelings!”

GR: “My manager suggested that we have a ballad on this record, because everything was sounding pretty heavy. I really love writing ballads. In fact, I almost find them easier than any other songs. I can really be mortal if I want to be. It’s kind of cool with this one, because I captured it in 24 hours. I wrote it on a Sunday and recorded it on Monday. I’ve never had that with a song so freshly written, it’s really unusual. Usually we have songs around for some time, so I love it for that. And when I listen to it and read it, it just sounds like that time. It just sounds like the sound of a bleeding lung, but with melody.”

9. Our Time Will Come

GR: “This is a song about looking through anything bleak in your life and realising that amazing things are happening and amazing things will come. I love that idea, when you say your time will come, it means you’re not impatient. You know, it means that you’re not brash. It just means that you’re earning your way and figuring stuff out. And if you just hold steady, your time will come. And that’s the law of averages. The longer you hold steady, the longer you get better at something. So there is something in that, some beauty in that. Artisan style.”

GR: “This song is just that moment in your life when it really comes down to it, and you’re making some major decisions. They don’t come around that often, but they really predict your life. It’s what you come open to, you come closed to, and get focused on. Crossroads… they’ll keep coming around!”

11. Words Are Not Impediments

GR: “They most certainly are not impediments. Really, the basis of all communication has to be verbal primarily and obviously physical in the way that people look at you and how menacing their tone is. I think post-pandemic, we need to look at better ways to communicate, better ways to understand and better ways to look at people around us who make everything work. They're usually the people that are least looked after. So, that's something to think about. Who knew? Words Are Not Impediments."

GR: “The song about the art of living, the song about being free. Losing yourself in someone, in an idea, on work you love, whatever it is. ‘Searching for the best part of myself, still looking’… that’s the first line. Enjoy this song, it’s got a nice end to the record and it’s meant to be uplifting”.

The Kingdom is available now via BMG.