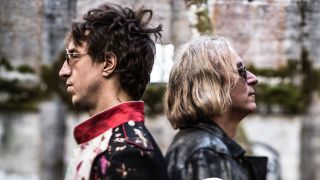 R.E.M. co-founder Peter Buck has announced that he will release an album with Fistful Of Mercy songwriter Joseph Arthur later this year.

1. I Am The Moment
2. Are You Electrified?
3. The Wanderer
4. Forever Waiting
5. If You Wake Up In Time
6. Summertime
7. American Century
8. Forever Falling
9. Before Your Love Is Gone
10. Wide Awake In November
11. Can’t Make It Without You

Titled Arthur Buck, it's due for release on June 15 via New West Records. It’ll mark the duo's first collaboration.

Arthur says about the album: "My first thought was, ‘Hey, I’ll get Peter to play acoustic guitar on some of the stuff I’m working on!’ So I started showing him songs. But he was like, ‘That’s cool. Now check this out.’ And he started playing chords and whatnot. So I put my guitar down and began singing over his changes, and it was magical. It was easy. And these great songs just started popping out.”

“It was all new songs, and it was spontaneous,” Buck adds. “And the great thing about working that way was that it didn’t have to be anything in particular. It was liberated from any expectation. It was free.”

The album will be available on blue and red split coloured vinyl, standard black vinyl, and CD. It's currently available for pre-order.

Listen to first track I Am The Moment below.