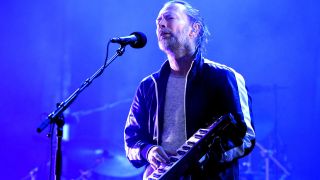 Rare portraits of Radiohead are to go on display at a new photography exhibition in London.

Music photographer Sebastian Edge uses an advanced 19th century collodion wet plate technique, using sheets of glass instead of camera film in his hand-built ‘Hurricane’ camera – which will also be put on display. The three, eight-foot long portraits will be showcased at Metropolis Studios alongside his other work with bands such as Mars Volta.

Edge says it was his unique photography skills which led him to gain work with Radiohead in 2011.

He tells The Line Of Best Fit: “In January 2011, I received a call from Radiohead Headquarters. They’d heard about a photographer that was making pictures with this early Victorian process, with a camera built from Hurricane timber, and wondered if I was still making pictures having disappeared from the music scene for a while.

“Within a few weeks I arrived at their studio and spent two separate days making the pictures for their King Of Limbs campaign. A day in the woods and a day at their studio. Colin Greenwood loved it, being a photographer himself.

“After a while I think they realised these weren’t just photos they are works of hard crafted art and as analogue and as ‘hands on’ as it could possibly get.”

The exhibition opens in a private launch event at Metropolis Studios on October 13. It will be open by invite only from October 14.

Last year Classic Rock went behind-the-scenes with Clutch on their photo shoot with New York photographer Justin Borucki, who also uses the collodion wet plate process. It can be viewed below.