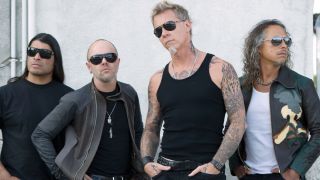 Metallica have announced that they’ll live stream their show from US Bank Stadium in Minneapolis on August 20.

The show is sold out, but James Hetfield, Kirk Hammett, Lars Ulrich and Robert Trujillo’s performance will be broadcast via Pandora in the States, Australia and New Zealand – and on Metallica’s website for those living outside those countries.

The band say in a statement: “We’re gearing up to step out of the studio and back on to the road next week and we can’t wait to be a part of opening weekend at the brand new US Bank Stadium in Minneapolis.

“Thanks to you the show is sold out, but if you can’t be there in person we want to bring the music to you and we’ve teamed up with Pandora to do it. Next Saturday, August 20 our friends at Pandora will live stream the entire concert starting at approximately 9pm local Central Time.”

Metallica recently announced they would also play September’s free Global Citizen concert in New York on September 24, which will be streamed via YouTube and MSNBC, and audio on iHeartRadio.

They’ll join Eddie Vedder, Chris Martin, Cat Stevens and others at the fifth annual event, which seeks to encourage the concept of everyday people helping solve the world’s social problems.

Metallica are currently working on their 10th album – the follow up to 2008’s Death Magnetic.

How Metallica’s Kill 'Em All changed the world