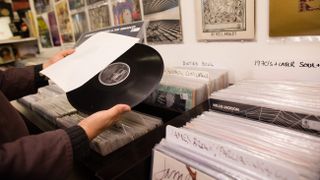 New research suggests nostalgic middle-aged introverts are behind the resurgence in vinyl sales – rather than young hipsters.

Sales of vinyl records have been on the rise in recent years, with last year’s figures showing a 64% increase in the UK. And while there has been some evidence to suggest that young people pay for music more than their elders, new figures from YouGov say that isn’t the case when it comes to vinyl.

The YouGov Profiles data reveals that people who’ve purchased a vinyl album recently are more likely to be aged between 45-54, while those in the 18-24 age group are the least likely to have done so.

The stats also show that music plays a central part in vinyl buyer’s lives. YouGov say: “Two thirds, 66%, of this group say they could not get through day without listening to music, compared to 49% of UK adults in general. A third, 33%, of record buyers say they listen ‘whenever they can’ compared to 25% of over-18s overall.”

Vinyl lovers are also more likely to go to gigs, with 68% saying they are happy to pay to see their favourite acts live. And they also condemn illegal downloading, with 59% of vinyl buyers saying it’s “wrong.”

YouGov add that vinyl buyers are slightly more likely to both keep their feelings to themselves and enjoy being alone.

The market research specialists say: “For now, the vinyl renaissance remains something of a sideshow to the digital juggernaut. To become fully ingratiated in music culture once more, vinyl will have to convince younger music fans – used to the convenience their preferred services provide – of their worth.

“Doing this will be no easy thing given playing a record requires them to buy a load of new and expensive kit.

“What’s more, those in the younger age groups must be convinced to see the albums as more than just an extension to their favourite band’s t-shirt. It will be a irony indeed if album covers are used to sell everything except the records themselves.”

A survey carried out earlier this year revealed that half of vinyl buyers never play their records, preferring to keep them pristine.