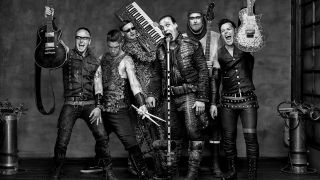 Rammstein have announced their return by revealing a run of 2019 European tour dates.

The German outfit have been teasing something all week, with their logo beamed on to buildings across Europe. Now it’s been revealed exactly what they’ve been up to.

They'll play a total of 16 stadium shows – including a date in the UK at the Milton Keynes Stadium on July 6.

Tickets will go on sale on November 8.

The dates coincide with guitarist Paul Landers’ comments from earlier this year, who said that the highly anticipated follow-up to 2009’s Liebe ist für alle da should arrive in the spring of 2019.

Speaking with Music Radar about the album, he said: “Right now, it looks like this new record will be coming out next spring, and what we’ve been mainly doing is playing together in a circle, with all the guys in one room.

“We all go into the mixing desk and I had my PL1 prototype going direct. Same for the some of the other guys – our drummer Christoph Schneider has these electronic drums, so we’ve been using that to play a bunch of ideas together.

“It hasn’t been like a pre-production where each member is alone – it’s been more of an all-together kind of thing. We liked the sound of it so much that we’ve decided to make the record more of a band-unit recording than a bunch of guys playing separately.”

Rammstein also previously posted pictures across social media saying they had been recording with an orchestra and choir.

Find a full list of tour dates and the tour announcement video from Rammstein below.