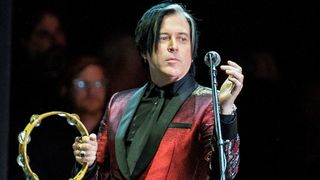 Queens Of The Stone Age are planning to record the follow-up to 2013’s …Like Clockwork before the end of the year.

But Josh Homme’s outfit want to avoid the pitfalls that tripped them during their last studio project. He last month described the next QOTSA studio project as “locked in.”

Van Leeuwen tells 2 Hours With Matt Pinfield: “We’ve already started talking about what we’re going to do for the next Queens record.

“There’s tons of ideas that are bouncing around. We’re excited to get back together to follow …Like Clockwork. We’re going to do something before the end of the year.”

He accepts the band’s sixth title was “a really, really big record” but adds: “It was the hardest record to make.”

It was released after a gestation period of more than five years, during which Homme struggled with his health, failed in his bid to secure Trent Reznor as producer, and lost the services of drummer Joey Castillo.

Homme called the process “a tough time,” telling the NME: “I thought, ‘I can run away from this – or I can run into it.’”

Van Leeuwen reports: “We’re trying not to do that again. We want to keep things simpler, and try that.”

He was due to tour with supergroup Gone Is Gone this month, but plans were abandoned due to scheduling conflicts between the members, which includes Mastodon and At The Drive-In personnel. Their self-titled debut EP was released earlier this month.

The top 10 best Queens Of The Stone Age songs