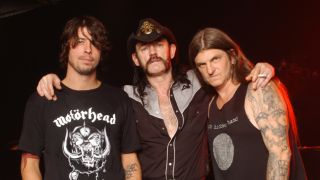 After touring in support of Foo Fighters’ decidedly mellow There Is Nothing Left To Lose, frontman Dave Grohl developed a metal itch that needed a scratch. After recording a series of metal instrumentals with producer Adam Kasper in his Virginian home studio, he hit upon the idea of getting a list of his heroes to sing over the top.

This is the story of how “a stupid, middle-of-the-road, alternative-rock idiot” (his words, not ours) started sending tapes in the mail to a load of metal legends and set about making one of the heaviest albums of 2004…

Novel at the time, hyped at the time, and worth hype at the time, Probot was Dave Grohl’s wonderfully weird way of paying homage to his youth – and this youth, pounding drums all over Washington DC, was a metalhead.

The project hung around for years. Various metal guys piped up about their involvement, their pending involvement, work done and disappeared, and then, in early 2004, it arrived. And what we got with Probot was Grohl happily headlining out a backing track over which squatted all manner of underground metal legends, each specimen croaking lyrics of his own, he and Grohl becoming long-distance collaborators, mini metal admiration societies forming through Fed-Ex.

“It started out as a project in my basement,” says Dave. “At first, I was recording a bunch of instrumentals for fun and had no intention of having anyone else sing on it, but then after recording the first seven songs, I thought it would be kind of funny to almost make fun of that Santana record [Supernatural] that had come out, with a different vocalist on every song. And then I played on the Tony Iommi record which had the same concept, and I thought, ‘Wow, maybe this will work’. But instead of having the mainstream or more popular singers, I decided to restrict it to this genre of underground metal from 1982 to 1989. So we started calling people.

“I wasn’t sure everyone would be co-operative, just because it was kind of out of left-field that a guy from Nirvana would be calling people like Cronos from Venom or Tom G. Warrior or Lee Dorrian,” he adds. “But everybody was really, really excited to do it. And from there, it was really a simple process of calling up and saying, ‘Would you like to be part of it?’ And if they agreed, I would send them a copy of the song I thought they should sing on, and they’d say yes or no – everybody said yes. We’d send them the master tape, give them money for the studio, then they’d sing on them and send it back. And one by one, they started coming back and they were just fucking awesome!”

Did he tailor the songs to each singer’s specific metal style?

“I tried not to,” says Grohl. “The first seven songs were definitely blind instrumentals. But then the next five songs were a little more matched to the people I thought should sing on them. And I had a list of my dream team of singers. So, somewhat. The Lemmy track was written for Lemmy. I didn’t want to give him something a little too off the wall or too artsy or weird. The song I gave to Max Cavalera was pretty close to what he was used to doing. But for the most part, they are just really kind of song-based. I mean, even the instrumental songs, before the vocals were added, had sort of linear arrangements.

“Everything was so incredibly simple,” he adds. “It was as easy as sending a tape in a Fed-Ex box to someone having it come back, listening to it and then taking it to a mixing studio and fuckin’ laying it down. The logistics were insane though. People were spread out all over the world, but the process was really simple. I never gave any suggestions. Everybody did more or less than I expected and that was it. I’d send them the track and go, ‘Wow, this is great’. Then they’d send the track back, and I’d go, ‘Wow, this is great!’

And Grohl is the first to admit that the 12-song project was a chance to work with some of his heroes, but has yet to meet some of the people who’ve contributed vocals to the album.

“I met Kurt [Brecht] rom D.R.I. in 1983, at one of their shows in Washington DC,” he gushes. “I bought their 22-song seven-inch from them, out of their van. So he was probably the first one on the record that I’d ever met. But over the years, I’ve grown to know people like Mike Dean, or Wino from The Obsessed. He’s a local hero for me. My hardcore band opened up for his in 1984. Who else? Voivod. I really worshipped Voivod over the years. And we’ve bumped into each other a few times. There are a few people on the album that I hadn’t met – guys like King Diamond and Tom G. Warrior.”

Speaking of Voivod, Probot’s cover art was drawn by none other than that band’s visualise (and drummer and lyricist) Michel ‘Away’ Langevin. “When I think of metal album covers, I think of Voivod,” explains Grohl. “The first five album covers are some of the best album covers of all time. Away, man… everything from the logo to the way he writes text to his computer graphics, he’s fucking amazing. And so I knew, right off the bat, when we officially decided to make a Probot album, I knew that I would want Michel to do it. It just made sense.”

Once the project had been hammered home, Dave ran the idea around Roadrunner Records, who he knew would handle it deftly, and also RCA, who he was not so sure about. “My main concern was that the album remained focused on the vocalists and not me,” he explains. “Roadrunner, I knew, would do a great job at releasing the album. RCA have done a great job for the Foo Fighters, but I couldn’t really see them understanding the Probot project, because the whole thing is rooted in the underground metal scene from the 80s, which I was a part of; it went hand-in-hand with the hardcore scene. It’s just a separate reality from what happens at most major labels. If you don’t understand that spirit or that particular ethic, then it would be hard to make the Probot record happen correctly. So I was stuck, actually. I didn’t know what to do for the longest time.

After a full two years of fulminating, Grohl hooked up with the semi-indie Southern Lord label, with whom Grohl was acquainted on a personal level, and who also understood Grohl’s penchant for doom metal, having released records by Saint Vitus, Place Of Skulls, Goatsnake and Pentagram. So a home was found, and Probot, through the early months of 2004, was launched to massive press as well as great sales, but not so much compared to what might have been expected had this beast landed on a major.

“Probot is Probot,” says Dave, reflecting on whether the thing could have toured, with or without iconoclastic underground noisemakers at the mic. “The logistics of making this album were so completely insane, I can’t even imagine getting all these people into one room at the same time. It would have been amazing to do one show for a record release party, but it’s kind of great and special that it’s a once-in-a-lifetime thing. And it should remain that way…”

“I didn’t come up with the idea of the song until I heard the music, which is how I normally write anyway. I like to get a vibe and work from there. Musically, the song is very doom and lyrically it is too. It’s pretty much about prehistoric man looking into the future and seeing the world slowly dying before him due to the self-destructive urges of human nature. Musically, I didn’t really know what to expect, but I had an idea it was going to be very heavy. As it turns out, it was almost like the song Cathedral never wrote, proper doom and very well structured. I loved it as soon as I heard it. It felt very natural and it was an easy song to work with. Maybe there were one or two phrases I had lying around, but basically, I wrote the song from scratch after I heard the music.”

“This song is about Thoth the Egyptian knowledge god, the Ibis-headed scribe and his tables or tablets of destiny. They lie, glowing beneath the paws of the sphinx. I also contemplate the Goddess influence on humanity, strength of self with a little bloodline of Christ in there too. The beginning line, spoken, is Sumerian translated from cuneiform tablets. The music was right up my alley and fresh and upbeat; I loved it. Totally fresh, although I had some ideas kicking around in my brain. I worked hard on it. I took it on a Spirit Caravan tour and got down with my headphones and pen. I was reading some Sitchin at the time and digging the Templars.”

Cronos on Centuries Of Sin

“I actually wrote three sets of lyrics for the music Dave sent me. Fighting Talk which was a rock’n’roll drinking/fighting song; Love Dies which is a sleazy song about prostitutes and so on, and then Centuries Of Sin, which is a song about evil, evil shit – my favourite subject. It’s basically a Satanic perspective on life – this ain’t a bed of roses, survival of the fittest, our history has more accounts of dirty deeds than love thy neighbour. We’re still animals with a fuck-or-be-fucked nature. I think musically, the track was very venomous, like something off my album Resurrection.”