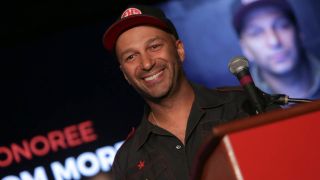 Prophets Of Rage have announced their first show together since forming the project.

And they’ve given short notice of the event, which will be held at Whisky A Go Go in Los Angeles tonight (May 31).

A statement reads: “Prophets Of Rage combines the sonic firepower of Rage Against The Machine, Public Enemy and Cypress Hill. We can no longer stand on the sidelines of history. Dangerous times demand dangerous songs. It’s time to take the power back. It’s time to make America rage again.”

They’ll be joined by DJ Lord and the gig will take place at 8.30pm local time, with tickets going on sale from the venue at 10am. Entry is $20 and only cash will be accepted. All proceeds will go towards the charity P.A.T.H. (People Assisting The Homeless).

Earlier this month, the band revealed a countdown clock on their website. Another countdown has now been activated and is due to end tomorrow.