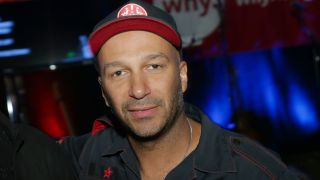 Rage Against The Machine are not reuniting – but reports suggest members Tom Morello, Tim Commerford and Brad Wilk are gearing up to reveal a supergroup featuring members of Public Enemy and Cypress Hill.

The band yesterday unveiled a countdown clock at Prophetsofrage.com along with the hashtag #TakeThePowerBack, while Public Enemy’s Chuck D posted a series of RATM videos.

A source has told Billboard that the new band, Prophets Of Rage, will include D and Cypress Hill’s B-Real, and that they’ll perform their first shows early next month.

A RATM spokesperson told Rolling Stone that the band were not about to announce a reunion, adding: “There’s a lot more to it. There are a lot of moving parts – a lot of exciting news to be revealed. There are more announcements to come.”

Frontman Zack de la Rocha is not involved with the supergroup project. RATM last performed in 2011, but bassist Commerford said last year: “We still might play again. You never know what the future will bring.”

Story Behind the Song: Killing In The Name by Rage Against The Machine