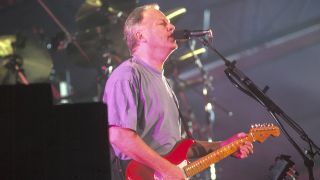 Pink Floyd’s live album Pulse is to be reissued later this year.

Originally released in 1995, Pulse was recorded as Floyd toured across the UK and Europe in support of their 14th studio album The Division Bell in 1994.

The remastered version will be presented as a 4LP set and pressed on 180g heavyweight vinyl and will launch on May 18.

The album will include four different inner sleeves and come with a 52-page hardback photo book encased in a thick card slipcase. It will also feature One Of These Days, which was only included on the LP and cassette version of Pulse upon its original release.

Pulse 2018 was remastered from the original tapes by James Guthrie, Joel Plante and Bernie Grundman. Aubrey Powell of Hipgnosis and Peter Curzon – who worked on the original art with the late Hipgnosis co-founder Storm Thorgerson – recreated the art package.

Find the cover art, packaging and tracklist below.