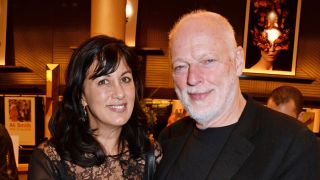 Pink Floyd leader David Gilmour has revealed the title of his next solo album – it’s called Rattle That Lock.

It includes tracks provisionally called Girl With A Yellow Dress and Just Do It, and features contributions from Roxy Music’s Phil Manzanera and Jools Holland.

Gilmour and wife Polly Samson, who wrote the album’s lyrics, discussed the work at the Borris House Festival Of Writing And Ideas in Ireland over the weekend.

BrainDamage reports that Samson said the theme was “Carpe diem – seize every moment, look to the future, ‘Just Do It’ and don’t hold back.”

Meanwhile, Gilmour, who’s previously said that Floyd’s 2014 album The Endless River was their last, and he had “no room” for the band in his future, responded to more queries about a reunion with Roger Waters.

He replied: “Despite having nothing – well almost nothing – but fond memories of Roger’s working relationship, it ain’t going to happen.”

The follow-up to 2006’s On An Island is due for release in time for Gilmour’s autumn tour: