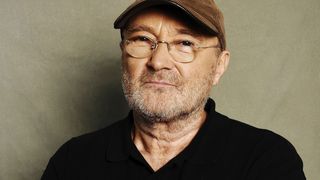 He made the comment at his press conference to announce his Not Dead Yet European comeback tour, which kicks off with a five-night residency at London’s Royal Albert Hall in June 2017.

He won’t be behind the kit during the run of nine dates, with his son Nicholas taking over drumming duties. And Collins has explained why he’s had to take a step back from the instrument he made his name with.

He says: “I’ll never play the way I used to. Something happened on the Genesis reunion tour. At the end of each show, I had a drumming duel with Chester Thompson – and one night something happened.

“It just went. I tried everything – bigger drumsticks and so on, but it just never came back.

“It’s a mystery what happened, I just couldn’t get it back. But I’m 65 and I played drums since I was five. I’d like to have the choice about being able to play, but I’m not going to cry myself to sleep about it.”

As for his son’s involvement in the live shows, Collins adds: “He’s learned from watching John Bonham, Chad Smith and me, so he’s got some balls when he plays.

“He takes notes very well. It can obviously be awkward when it’s family – they might not take criticism, but Nick is great at taking advice.

“We’ve played three short charity shows in Europe together, seven-song things, and the band have been very impressed with him.”

Meanwhile, it’s been revealed that streams of Collins’ solo tracks on Spotify have jumped by 94% in the past 12 months.

The top five tracks are You Can’t Hurry Love, In The Air Tonight, Against All Odds (Take A Look At Me Now), You’ll Be In My Heart and Another Day In Paradise.

Collins recently released The Singles collection featuring 45 of his solo tracks, while his autobiography Not Dead Yet is out tomorrow (October 20) via Penguin random House.