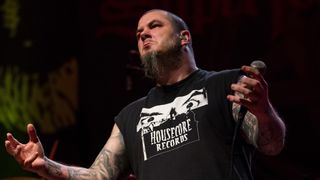 The former Pantera and current Down and Superjoint singer Anselmo will act as guest vocalist for Eyehategod at Southport Music Hall in New Orleans on August 19 and at the seventh annual Gwar B-Q in Richmond, Virginia, on August 20.

Williams has had to step back from live duties due to unspecified health issues.

He says: “Due to some recent very important health issues I am dealing with, I would like to announce that Philip H Anselmo will be filling in for me at two special Eyehategod gigs.

“Phil has my full blessing for these shows and with all forces willing, I will return to the stage as soon as I am physically able.”

Eyehategod and Anselmo have a relationship going back years, with both hailing from New Orleans and Eyehategod’s 2014 self-titled album being released on Anselmo’s Housecore Records.

Anselmo has had a tumultuous 2016 following his “white power” outburst at the Dimebash event in January, held in honour of late Pantera guitarist Dimebag Darrell.

He was initially defiant in the face of widespread anger, but later apologised and said he was getting help for his alcohol dependency.

Fortarock festival in the Netherlands pulled Down from this year’s lineup in response to Anselmo’s antics and the band cancelled all of their planned tour dates.

Anselmo has since released new music with his new project Scour.