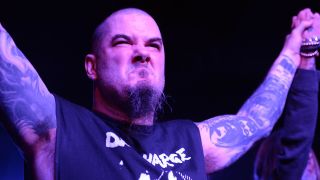 Over the weekend, fan-filmed footage of this year’s Dimebash, an annual all-star benefit concert honouring the memory of late Pantera guitarist Dimebag Darrell, began surfacing online. It was, by all accounts, a remarkable night, with Dave Grohl, Phil Anselmo, Robb Flynn, Zakk Wylde and members of Metallica, Alice In Chains, Stone Sour and more joining forces to pay tribute to Dimebag and raise money for the Ronnie James Dio Stand Up and Shout Cancer Fund. Footage of Grohl, Anselmo, Rob Trujillo and Dave Lombardo jamming out on Motörhead’s Ace Of Spades was especially heart-warming, both a salute to Lemmy’s memory and a powerful reminder of the shared sense of camaraderie and community which binds together the global heavy metal family.

And then yesterday a 21 second video clip appeared on YouTube showing Phil Anselmo saluting the Hollywood crowd post-gig with a ‘Sieg Heil’ gesture and a shout of “White Power” and the feel-good vibes of the night rather dissipated.

The reaction to Anselmo’s actions have been varied, and in some cases, alarming. Certain major rock magazine websites have, at the time of writing, failed to even make mention of the incident, a shameful, negligent oversight which speaks of editorial weakness. Other news outlets have elected to couch coverage of the incident in conciliatory language, talking about what Anselmo “appears to” have said, and “appears to” have done, as if, perhaps, we cannot be trusted to verify the evidence presented before our eyes and ears. Let’s be clear: on the evening of January 22 one of the most respected and iconic vocalists in our world stood onstage in Los Angeles and delivered a Nazi salute and shouted a white supremacist slogan. Those are the cold, hard facts, let’s not pretend otherwise.

Within hours of the footage appearing online, Anselmo, posting on YouTube as Housecore Records, addressed the mounting controversy. Stating “No apologies from me”, Anselmo insisted that he was merely “joking”, claimed that his “inside joke” was a reference to participating musicians at the event drinking white wine, and said “Some of y’all need to thicken up your skin.”

“There’s plenty of fuckers to pick on with a more realistic agenda,” the singer added. “I fucking love everyone, I fucking loathe everyone, and that’s that.”

Move along then everyone, nothing to see here.

Remarkably, this frankly laughable explanation appears to have placated a significant section of the rock and metal community. Leading metal journalists, industry figures and musicians – normally so quick to share their deeply-held and hugely important opinions on everything on their Twitter accounts – have inexplicably fallen silent on this particular topic. Why? The answer, assuming that the industry hasn’t become a haven for racist apologists, can only be that there’s widespread embarrassment at one of the ‘family’ letting us down so badly. Either that, or there’s a lot of cowards in this business afraid of the consequences of calling out reprehensible behaviour.

For all its global reach, the ‘industry’ side of the heavy metal community is a relatively small and tightly-bound group. Approximately half of Metal Hammer writers – this one included – will have interviewed Phil Anselmo at least once during the past 25 years: among our professional and social circle there are scores of good people who’ve promoted shows for Anselmo’s bands, arranged media duties for the man, shared festival stages with him or simply clinked shot glasses with Anselmo on a never-forgotten night in some black-walled, sticky-floored dive bar. Almost all these people will have a story which helps foster the image of the singer as an uncompromising, intimidating character with a bone-dry wit, a sharp tongue and a quick temper but, ultimately, a good heart.

Beyond the industry, of course, there’s the countless thousands of metalheads who’ve bought tickets to see the vocalist front Pantera, Down or Superjoint Ritual, and millions more who’ve simply connected with the man via the monumental life-changing records that he has helped create. These people too, having invested so much of their lives in Anselmo’s art, will also feel that they have the measure of the man, that here is a fellow ‘defender of the faith’, a man we’d be proud to call a brother in metal. This, presumably, is why YouTube user Chris R., the man who posted the incriminating footage, originally decided he’d edit out Anselmo’s actions from his documentation of the Dimebash event, before changing his mind.

The unpalatable truth, however, beyond Anselmo’s iconic image is that the man has ‘previous’ in this area. Following the release of 1994’s Far Beyond Driven album, the singer was interviewed by MTV about allegations of racist undertones in his lyrics. Wearing a T-shirt from the controversial New York crossover band Carnivore depicting three interlocking number 7s – a symbol employed by the South African white supremacist Afrikaner Resistance Movement – Anselmo dismissed the accusation but stopped short of condemning Pantera fans who shouted “White Power” at gigs, saying “I ain’t them kids, and them kids are going to yell what they’re going to yell anyway.”

In March 1995, during a Pantera show in Montreal, the then 26-year-old Anselmo told the crowd that while “Pantera are not a racist band” and that he and his bandmates had friends “of all colours and all kinds”, he had a problem with rap artists “pissing all over white culture”. Furthermore, Anselmo continued, pleas from the African-American community to end ‘Black on Black crime’ should be interpreted as “it’s okay to kill white people”: white people, the singer insisted, needed to take more pride in who they are.

The singer later apologised for his rant, and the “harmful words that may have racially offended our audience”, but the controversy dogged him for years. In recent years, in his more reflective moments, Anselmo – a thoughtful man, for all his bullish, anti-intellectual John Doe bravado – was not slow to acknowledge the power of symbolism and speech to propagate hatred and division. In a 2015 interview with the Hard Rock Haven website the singer admitted that “with hindsight” he wouldn’t have incorporated a Confederate flag in the cover artwork of Superjoint Ritual’s debut album, and conceded that some of the lyrical content on the band’s second album A Lethal Dose Of American Hatred (which on Stealing A Page Or Two From Armed And Radical Pagans railed against “the coward Muḥammad” and “Jewish elitists”) was “regrettable.”

So, should we attribute Anselmo’s actions at Dimebash as another example of his “crazy sense of humour” and view that Nazi salute as mere “tongue-in-cheek” banter? That seems an exceptionally generous interpretation of events. Is Anselmo a racist? He’s consistently refuted the accusation – once citing his admiration of black boxers and the fact that he once had a black girlfriend as a rebuttal of the notion, as if that proves anything at all – but his stunt onstage at Dimebash does him no favours.

A common response to the reporting of Anselmo’s actions has been ‘Who cares?’ Behind this blunt reaction, even if at an unconscious level, is the argument that we would be wise to separate the artist from the art they make. It’s a valid point: certainly The Rock And Roll Hall Of Fame would be distinctly less populated if all the child abusers, wife beaters and racists were removed from its ennobled ranks.

But while no-one is ever going to suggest you start melting down your Pantera, Down or Superjoint albums in response to the events of January 22, as a community we should be able to call out bullshit when we see it, and not turn our eyes away from bigotry, prejudice and ignorance when it doesn’t suit us to face awkward realities. Metal has a proud reputation for inclusivity and tolerance, for supporting and nurturing the oppressed and mistreated, and these characteristics have remained fundamental to the scene as it has taken hold as a truly global movement.

It’d be naive to pretend that there aren’t already knuckle-dragging racists lurking within this happy family – go look at the comments beneath the Anselmo story on the Hammer Facebook page if you’re in any doubt about that – but as much as metal’s most celebrated figureheads have always drawn inspiration from the darker side of human nature, as a scene we eulogise individuality, diversity and freedom of expression, ideas which fly in the face of narrow-minded racist thinking. In the same week the world marks Holocaust Memorial Day it shouldn’t really need saying that co-opting far right symbolism and sloganeering is not okay, and Phil Anselmo doesn’t get a free pass because he’s an icon in our eyes. Fuck Nazis and fuck racial hatred: every creed and every kind to give us depth for strength, as Phil once said.