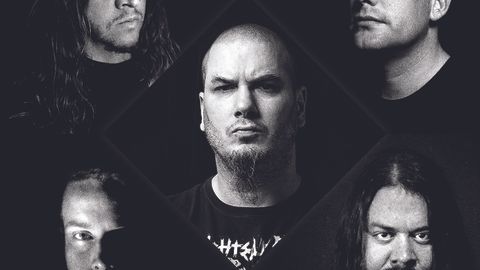 With unfortunate and recent events being what they are, combined with people peeking under the rocks and pebbles of the lives of public figures, you’ve probably heard a bunch about Phil Anselmo and have formulated an opinion one way or another.

To the detriment of Scour, whatever the hell Anselmo gets up to behind the scenes is going to obscure that fact that a) the vocalist was the last piece of the puzzle in a project originally created by Cattle Decapitation bassist Derek Engemann and members of Pig Destroyer, Continuum and Strong Intention; and b) Anselmo delivers an impassioned performance that takes the band’s coruscating blackness a step up.

References to Cattle Decapitation’s rapid fire, melodic linearity are expectedly present, but the atmosphere rockets back in time to 90s Scandinavian black metal as guitars writhe atop washy blastbeats and the melodies sear ears and rip faces off. Anselmo’s gruff punctuations sidle away from the genre’s customary banshee screech towards aggressively powerful death-punk grunts. When presented with the incendiary Dispatched and Tear Gas’s mid-range wave ride, it’s amazing to discover Engemann and Pig Destroyer’s John Jarvis assembled Scour separately and while on tour together, and what the result might be once everyone gets in the same room.