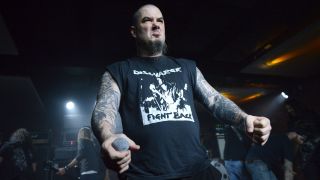 Organisers of Dutch festival FortaRock have pulled Phil Anselmo’s Down from this year’s bill.

The band were due to appear at the event on June 4 and 5 at Nijmegen, Netherlands. But following frontman Anselmo’s “white power” outburst last week, the vocalist has been told he and his band are “no longer welcome” at the gathering.

FortaRock organisers say in a statement: “After the recent outbursts by singer Phil Anselmo during the Dimebash event in the US, his band Down is no longer welcome at FortaRock.

“There has been close consultation between all parties in recent days since we wanted to make a well-informed decision. On that basis, the decision is made to cancel the act.

“We want to make clear that there is no room for racism or fascism at FortaRock.”

Anselmo’s actions were slammed by Machine Head frontman Robb Flynn and others from the music world, leading the former Pantera man to issue an apology in which he begged to be given “another chance.”

Anselmo initially refused to say sorry and insisted he was making an in-joke about drinking white wine backstage.