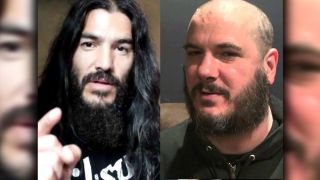 Machine Head’s Robb Flynn has slammed Phil Anselmo over his Nazi gesture at Dimebash and rubbished the former Pantera man’s claim it was an “inside joke.”

Anselmo performed a version of Pantera classic Walk at last week’s Hollywood event held in honour of his late bandmate Dimebag Darrell Abbott and, as he was leaving the stage, made a Nazi-style salute before apparently screaming “white power.”

He later refused to apologise and said it was an “inside joke” about drinking white wine backstage – a claim Flynn, who was also at Dimebash, says cannot be true as he saw no white wine on the night.

In an 11-minute video message posted to YouTube and addressed to Anselmo, Flynn says: “I was there, and I can tell you for a fact that there was not a Chardonnay or a Pinot Grigio in sight backstage.

“In fact, the only thing that you were drinking, Phil Anselmo, was Beck’s German beer. Maybe that’s where the joke came from. Get it? German beer. White power. Fucking hysterical stuff there.”

Flynn goes on to claim Anselmo spoke to him backstage at Dimebash and made racists comments. He says: “I bumped into Phil and decided to strike up a short conversation as we were gonna play a couple of Pantera songs together.

“Within 30 seconds of sitting down and talking to him, his drunk ass decided to let me know in no uncertain terms that he hated the ‘nigger’ era of Machine Head, referring to our third album, The Burning Red.

“He hated every second of it. Hated it with a passion. I just laughed in his face. ‘You are gonna sit there and judge me for the way I looked back in the day? For the music I was making back in the day?’ Pot, meet kettle.”

Flynn has also urged the metal community not to accept racism from its stars.

“Goodbye, Phil Anselmo. And to the metal community that backs this bullshit, see you later. Count me out. I want no part of this anymore.”