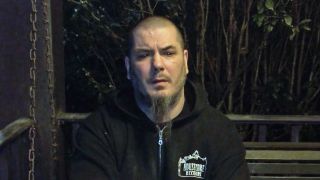 Phil Anselmo has apologised for his “white power” outburst and begged for “another chance.”

The Pantera icon made a Nazi salute and shouted “white power” at the end of last week’s Dimebash event, held in Hollywood in honour of his late bandmate Dimebag Darrell Abbott.

He initially refused to say sorry and insisted he was making an in-joke about drinking white wine backstage.

But following a backlash from the music world, led by Machine Head frontman Robb Flynn, Anselmo has posted a video online in which he asks for forgiveness.

Anselmo says: “I’m here to respond to all the heat I’ve been getting, that I deserve completely. I was at the Dimebash and it was extremely late at night, there was heavy duty talk between myself and those who loved Dime.

“Heavy emotions were flowing and jokes were made backstage that transpired upon the stage. And it was ugly, it was uncalled for.

“Anyone who knows me and my true nature knows that I don’t believe in any of that. I don’t want to be part of any group, I am an individual.

“I am 1000% apologetic to anyone that took offence to what I said, because you should have taken offence. I am so sorry and I hope you just give me another chance. I love all of you.”