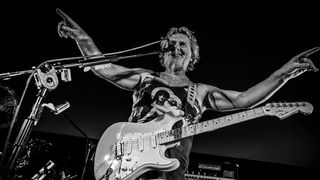 Pendragon have announced a special one-off show in aid of Macmillan Cancer Support. They will play Swindon’s Riffs Bar on Friday December 30. This will, the band state, be a full Pendragon show and the band’s last show of 2016. Tickets for the event, which are non-refundable e-tickets, which include a charitable donation, are available from The Merch Desk here.

The gig is in support of the band’s “merch mummy” and singer Nick Barrett’s better half Rachel Wilce, who is undertaking an epic charity walk across Costa Rica, from the Caribbean to the Pacific coast in early 2017 to help raise my for the cancer charity. “It’ a big old walk,” Rachel told us. “And I want to raise a heap of dosh for Macmillan as they are such lovely people and mountains, volcanoes, scary critters and altitude sickness seems like an exciting and daunting way to do it.

You can read more about Rachel’s impending walk here.