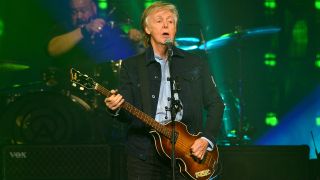 Paul McCartney has revealed he's recorded a ‘secret’ Christmas album – but the chances of fans ever getting to hear it are slim, as the former Beatles icon created it “just for the family.”

McCartney was speaking with BBC Radio 4’s World At One when he revealed that the material takes the form of Christmas carol instrumentals, explaining: “Years ago, I thought, ‘There's not very good Christmas records,’ so I actually went into my studio over a couple of years and I made one.

“But it’s just for the family. It gets brought out each year, I’ve just got a little demo of it, but the kids like it. It’s kind of traditional – it's something they've heard through the years and now it's the grandkids getting indoctrinated with my carols record.”

Yesterday, it was revealed that McCartney’s 2005 children’s book High In The Clouds which he created with Geoff Dunbar and Philip Ardagh, is to be adapted into an animated film on Netflix.

Earlier this year, McCartney teamed up with illustrator Kathryn Durst for the book Hey Grandude, which was published through Puffin and is said to be “a heart-warming family story inspired by Paul’s own experience of being a grandfather.”

It was also recently confirmed that McCartney would headline next summer's Glastonbury festival.