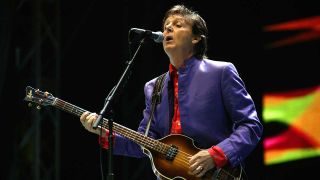 Sir Paul McCartney has been confirmed to headline the 50th anniversary edition of the Glastonbury Festival.

McCartney will top the bill on the Pyramid Stage at the annual festival on Saturday 27 June 2020, which will take place as usual at Worthy Farm in Pilton, Somerset.

The former Beatle's spot at the festival has been rumoured for some time, but there was no official confirmation until today, when he posted a cryptic tweet featuring pictures of Phllip Glass, Emma Stone and Chuck Berry. You do the math.

This was followed by confirmation from festival organiser Emily Eavis, who said on Instagram, "Having Paul McCartney coming back to headline the Pyramid next year is an absolute dream come true. There really was no one that we wanted more for the 50th anniversary."

McCartney's only previous appearance at the festival was in 2004, when he also headlined the Saturday Pyramid Stage slot. He was also rumoured to be appearing in 1989 as part of Donovan's 'Donovan & Friends' soiree, but no such coupling materialised.

Last month, Brian May ruled out the possibility of Queen playing at Glastonbury, saying, "There are lots of reasons. One of them is that Glastonbury co-creator Michael Eavis has frequently insulted me, and I don’t really particularly enjoy that.

“What bothers me more is that he’s in favour of the badger cull, which I regard as a tragedy and an unnecessary crime against wildlife.

“So no. There’s a little bit of a schism there. I wouldn’t do Glastonbury unless things changed radically.”

IT’S REAL!! So excited... Having @paulmccartney coming back to headline the Pyramid next year is an absolute dream come true. There really was no one that we wanted more for the 50th anniversary Emily Eavis