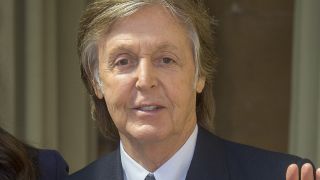 An animated film based on Paul McCartney’s children’s book High In The Clouds is coming to Netflix, it’s been announced.

The former Beatles star created the book with Geoff Dunbar and Philip Ardagh in 2005, with the new project featuring music from McCartney and overseen by director Timothy Reckart.

High In The Clouds was also co-produced by McCartney along with Bob Shaye, Sidonie Dumas, Christophe Riandee, Nicolas Atlan, Terry Kalagian (Gaumont) and the late Michael Lynne, with the screenplay written by Jon Croker, who was behind the popular Paddington movies.

The plot “follows an imaginative teenage squirrel named Wirral, who finds himself pulled into a ramshackle gang of teenage rebels who live high in the clouds. After he accidentally antagonises Gretsch the owl, the tyrannical leader – and fabulous singer – who steals the voice of anyone who upstages her.”

McCarney says: “We are thrilled to be partnering with Netflix. They complement what is already an amazing team with Gaumont and we can think of no one better to be working with to bring our film to a global audience.

“I’ve always loved animated films and this is a hugely important passion project for me. I can’t wait for the world to see it.”

A release date for High In The Clouds will be revealed in due course.

Earlier this year, McCartney teamed up with illustrator Kathryn Durst for the book Hey Grandude, which was published through Puffin and is said to be “a heart-warming family story inspired by Paul’s own experience of being a grandfather.”

It was also recently confirmed that McCartney would headline next summer's Glastonbury festival.