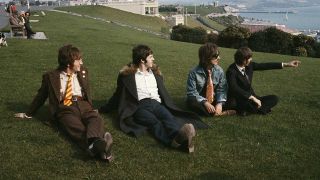 The legacy of The Beatles transcends generations and strides unfettered across cultural divides. The mere mention of the name, and the individual members, dead or alive, opens doors and builds bridges around the world (as Paul McCartney is fond of saying, “nobody is Beatle-proof”).

Strange, then, that the Fab Four have sometimes hit a brick wall in Classic Rock, with the voice of the reader who argues that John Lennon, McCartney, George Harrison and Ringo Starr should be this magazine’s bread-and-butter often drowned out by the admonitory comments that follow the band’s fleeting appearances in these pages.

The issues taken with The Beatles are many, varied and not always of their own making. There’s the crushing ubiquity, of course, coupled with the patronising finality with which Beatles fans declare them the ‘best’ or, worse still, ‘most important’ group in history.

There are the unbearably twee moments of the back catalogue (Yellow Submarine, say, or Rocky Racoon), the memories of McCartney mugging through Yesterday, and, indeed, the hangdog figure cut by the bassist in modern times. The tailored suits. The whimsical films. Yoko Ono.

But step back from the context. Clear your head of the fog of hyperbole. Allow yourself to listen to The Beatles as a band rather than as a cultural phenomenon, and you’ll remember just how much attitude, wit, sweat, eloquence, melody and – perhaps above all – sheer diversity they packed into their short career.

It’s reasonable to say you hate some Beatles songs; albums, even. But to claim there’s nothing in their staggeringly eclectic catalogue that moves you is tantamount to admitting you’re bored with music itself. Of course, the context always catches up with you in the end.

At a time when most popular performers were still mouthing the words of the Brill Building writers, The Beatles (along with Bob Dylan) led the way for any band who ever seized the reins of their art, strived to address the physical, spiritual and political world around them, and forced themselves to evolve in the face of commercial pressure to stay the same.

The Beatles did all that, in just eight years, and left behind a pile of tunes that simply towers over other artists. Here, then, are the best albums by The Beatles, and therefore some of the best albums ever to fly the flag of rock’n’roll.

Shifting fewer than Rubber Soul and surrendering the No.1 spot after seven weeks, Revolver might have suggested a downward trajectory were it not for the mind-blowing content.

Wildly experimental on Lennon’s LSD-flavoured I’m Only Sleeping, and offering McCartney gems in Eleanor Rigby and Here, There And Everywhere, this seventh album also owes much to Harrison, whose writing was never sharper than on the Inland Revenue-baiting Taxman and whose sand-blasted guitar lent muscle to And Your Bird Can Sing and She Said, She Said.

Always the rock fraternity’s favourite (and the blueprint for Noel Gallagher’s career), Revolver still has the power of a piledriver to the head.View Deal

With Lennon’s writing blunted by LSD and Harrison’s sole contribution the tedious Within You Without You, it fell to McCartney to pick up the slack on The Beatles’ defining eighth album. Fortunate, then, that the bassist was on the form of his life, coining the title and concept (such as it is) and turning in a brace of classics in Lovely Rita and the title track(s).

Staggering in its boldness and invention, Sgt. Pepper bottles the scattershot influences of its authors to perfection, and by the time the multi-tracked piano brings A Day In The Life clanging to a close, it’s fair to say that, yes, we enjoyed the show.View Deal

With Parlophone sceptical of their new group’s commercial viability, The Beatles’ debut was bashed out over the course of a 10-hour marathon at Abbey Road studios, at a cost of £400, as Lennon nursed a nasty cold.

Heard today, the pressure is still palpable, but the album is all the better for it, with I Saw Her Standing There fairly tearing out of the traps and the irresistible title track confirming that rock‘n’roll would never be the same again.

This was revolution on every level, with Lennon and McCartney writing eight original tracks (unheard of at the time) and finding space for a definitive take on The Isley Brothers’ Twist And Shout.View Deal

Following the bad-tempered Let It Be sessions of January 1969, McCartney cajoled his bandmates back into the titular studio to make an album “like the old days, like we used to”.

In reality, all concerned knew Abbey Road would be their last stand, which perhaps accounts for the nothing-to-lose musical attitude that pervades the eclectic tracklisting. On the vinyl version side one offers most of the crowd-pleasers, from the swamp-rock of Come Together to Harrison’s masterful Something.

And with highlights of the flip side including Here Comes The Sun and the prophetic The End, Abbey Road left us with plenty of reasons to mourn the Fab Four’s passing.View Deal

The film was rightly savaged, but 1967’s Magical Mystery Tour compilation – cut and pasted from the soundtrack and that year’s non-album cuts – has a strike rate that compares with Sgt. Pepper and Revolver.

‘The Magical Mystery Tour is coming to take you away,’ bellows McCartney in the bells-and-whistles title track. And what followed was every bit as escapist as he promised, weaving its way through the psychedelic rock of I Am The Walrus, the sing-it-in-your-sleep chorus of Hello Goodbye and, finally, a brace of Lennon masterpieces in Strawberry Fields Forever and All You Need Is Love, and a flash of McCartney genius in Penny Lane.View Deal

Having run out of steam on the lukewarm Help!, and with one eye on the evolving work of Bob Dylan, Rubber Soul found The Beatles tackling deeper subject matter and broadening their musical horizons beyond the ‘work songs’ that had previously been their stock-in-trade.

Certainly the four personalities were starting to flavour the music, with Lennon and McCartney laying themselves bare on Nowhere Man and You Won’t See Me, Harrison debuting his sitar obsession – for better or worse – on Norwegian Wood, and Ringo picking up his first co-writer credit for What Goes On.

A stepping stone to greater things, and a thrilling snapshot of their potential.View Deal

The Beatles (The White Album) (Apple/Parlophone, 1968)

The cracks were appearing as The Beatles laid down their sprawling post-Pepper double album, with Yoko Ono alienating Lennon’s bandmates to the point where they often worked in isolation in separate rooms at Abbey Road.

Inevitably there’s a lack of cohesion over the 30 tracks, and a strong case that it would have been twice the record at half the length (it’s hard to imagine anyone missing Rocky Raccoon), but the White Album claws back kudos with the breakneck Back In The U.S.S.R., McCartney’s touching I Will and the Clapton-assisted While My Guitar Gently Weeps. With stricter editing, it could have been their masterpiece.View Deal

With no time to dwell on the notion of a ‘difficult second album’, With The Beatles was punched out in a string of snatched sessions between touring commitments.

By now ‘Beatlemania’ was accepted terminology, and this record captured the dizzy thrill of the times, offered lower-profile gems in All My Loving and It Won’t Be Long, and showcased the band’s growing confidence as players.

The lack of a ‘big-name’ single has sometimes seen With The Beatles slip through the cracks. As a result, it hasn’t become as overfamiliar as most of the other Beatles albums, and remains among the freshest and most vital in the catalogue.View Deal

The songs had worked perfectly in the context of Richard Lester’s black-and-white film A Hard Day’s Night, and this tie-in album was no less effective.

While Lennon and McCartney were no longer the ‘eyeball-to-eyeball’ writing partnership they had been in the past, this is the first Beatles album with no covers (or, indeed, Ringo vocals), and fairly heaves under the weight of the duo’s melodic invention.

From the head-turning opening chord of the title track, through Lennon’s moving If I Fell, to the foot-stomping grit of Can’t Buy Me Love and When I Get Home, this record was hopeful, exuberant, and guaranteed to make the listener feel alright.View Deal