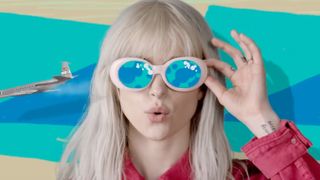 Paramore have announced that they’ll release their new album next month.

Titled After Laughter, it’ll launch on May 12 via Fueled By Ramen. The record will also feature the band’s original drummer Zac Farro.

He originally quit along with brother Josh in 2010, following the release of third album Brand New Eyes the previous year. It’s also Paramore’s first album without co-founder and bassist Jeremy Davis who departed in 2014.

Singer Hayley Williams tells the New York Times that “there was a dark cloud” over the writing and recording of After Laughter because of personal and professional issues.

Williams adds: “You can run on the fumes of being a teenager for as long as you want, but eventually life hits you really hard.

To mark the announcement, Paramore have also released a video for the track Hard Times from the record.

See the full tracklist and cover artwork below.

Paramore in 'painful' split with Davis