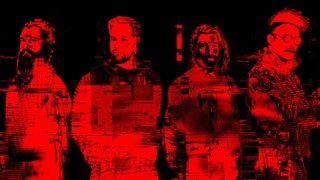 It’ll feature on the band’s upcoming album Shutdown.exe which was produced by Sean Beavan, who has worked with artists including Marilyn Manson, Nine Inch Nails and A Perfect Circle. It’s due out on may 19 via OMF Records.

Vocalist Alexis Mincolla says of the video: “Sometimes I see these talking heads spewing their knee-jerk dogma all over the TV and all I can think is how fun it would be to just slip a hit of acid in their morning coffee.”

Mincolla is joined in the lineup by keyboardist Xavier Swafford, drummer Andrew means and guitarist Chase Brawner, with their material said to be an “amalgam of aggressive sounds and compelling visual art that, combined with their cynical humour and provocative propaganda, ultimately asks fans to join their assault on consensus-based reality.”

3Teeth have several live shows scheduled across North America over the coming months, including a support slot for Rammstein. Find the dates below along with the Sutdown.exe tracklist and album artwork.