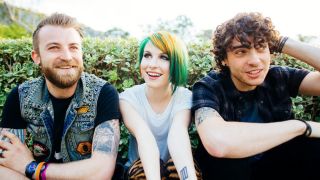 Paramore bassist Jeremy Davis has left the band in what his former colleagues call a “painful” split.

Davis was the Tennessee troupe’s first bass player when they formed in 2004, although he’d left by the time they recorded debut album All We Know Is Falling. He returned the following year and remained on board for 2007’s_ Riot!_, 2009’s Brand New Eyes and 2013’s self-titled release, recorded after the departure of Josh and Zac Farro.

Paramore say: “The self-titled era was one we knew would be important for us, but also one we’d eventually have to move on from. In moving forward, there is growth, pain, and change –and sometimes the change is not at all what you hoped for.

“We’ve written and re-written this countless times and there’s just not a good way to put it. Jeremy is no longer going to be in the band with us. This has been really painful.”

They add: “After taking time to consider how to move forward, we ultimately found that we really do believe Paramore can and should continue. And so we will.”

Williams and York say they’re positive about the future and that they’re “excited for what Jeremy’s going to do next.”

The band’s next engagement is their Parahoy! cruising festival in March.