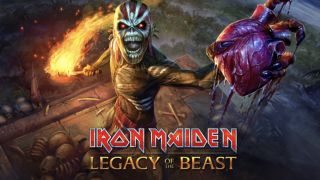 Iron Maiden’s mobile game Legacy Of The Beast has been expanded to coincide with the start of their European tour.

And with Iron Maiden’s European tour starting this weekend, the game has been expanded to include a player-vs-player battle arena inspired by one of the band’s stage sets along with ’Shaman Eddie’ from The Book Of Souls cover.

Iron Maiden Manager Rod Smallwood says: “With Legacy Of The Beast we wanted to create something that appealed both to fans of Maiden music and gamers alike – wherever they are in the world, and I think we are well on our way to accomplishing that.

“The game has kept true to the band’s history and development not only through their music, but with Eddie too.

“This latest feature focused around our current tour is only the start of many new and exciting innovations we have planned to keep Legacy evolving and becoming even more addictive!”

“Whether you’re seeing Iron Maiden on the road or playing Legacy Of The Beast on your mobile, we’ve crafted a gaming experience that explores the Mayan world of The Book Of Souls record and marks the first of many timed in-game events that will enrich the band’s touring activity, engaging fans old and new across the globe in a way never before possible.”

Iron Maiden: Legacy of the Beast is available now for free on Apple’s App Store and GooglePlay.

Iron Maiden are the cover stars of the latest edition of Metal Hammer magazine, which also features an interview with bassist Steve Harris.

The magazine also features While She Sleeps, Royal Thunder, Ghost Bath, Life Of Agony and more and is out now.

Brace yourselves: Iron Maiden’s Legacy Of The Beast game is going multiplayer